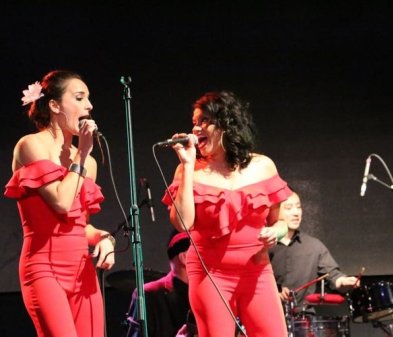 Sept. 29, Oldest Takeout in Queens, 7 pm. Queens Council on the Arts streams a virtual showcase of Matthew Schickele’s “The Oldest Takeout in Queens: A Singer and a Menu of Languages.” This new music composition is inspired by the linguistic diversity of Ridgewood and Queens. Get ready for Albanian, German, Gottscheerisch, Gurung, Ikota, Irish, Polish, Romanian, Serbian, Shughni, Sicilian, and Spanish.

Sept. 29, The Disciple, 7 pm (ish). Queens Drive-In shows an Indian film about a Mumbai man whose life goal is to follow in the footsteps of his father and become a practitioner of the centuries-old Khayal music tradition. New York Hall of Science Parking Lot, 47-01 111th St., Flushing Meadows Corona Park.

Sept. 30, Shadow Theater, 7 pm. This is Flushing Town Hall’s first show in a series featuring Spica Wobbe, who performs her new “Hand in Hand,” which is inspired by interviews with her mother during COVID-19.

Sept. 30, Creating a Concentration Camp Society: How Governments Push for Mass Detention and How People Resist, noon. The Kupferberg Holocaust Center and the Nancy & David Wolf Holocaust & Humanity Center present the first event in a colloquium. Author and journalist Andrea Pitzer lectures on how ruling parties engineer mass detention of civilians without trial.

Oct. 1, Festival of Cinema 2020, Oct. 4. The fourth annual Festival of Cinema NYC has a drive-in format. Organized into six thematic blocks, the lineup features 28 independent shorts, features, documentaries, experimental work, and animations chosen from submissions from around the world. They’ll be projected onto a five-story screen in St. John’s University’s parking lot at either 7 pm or 10 pm.

Oct. 1, Paint Under the Full Moon, 7 pm. Masa Kitani of Creative Scene teaches how to paint a magnificent butterfly, the symbol of hope, on a wine glass during this Alley Pond Environmental Center program.

Oct. 1, Hitching for Hope: A Journey into the Heart and Soul of Ireland, 2 pm. Best-selling author Ruairí McKiernan provives stories, inspiration, and great conversation from the west coast of Ireland during this virtual event sponsored by the New York Irish Center.

Oct. 2, Free First Friday, 10 am. Noguchi Museum re-starts an old program! On the first Friday of every month, admission is free. Due to COVID, a limited number of guests can visit at any one time, and all visits must be scheduled in advance. NM, 9-01 33rd Rd., LIC.

Oct. 2, I Carry You With Me, 7 pm (ish). Queens Drive-In screens a Mexican movie about a gay romance between a semi-closeted young father and a high school teacher that takes a turn when El Norte beckons. New York Hall of Science Parking Lot, 47-01 111th St., Flushing Meadows Corona Park.

Oct. 4, Marcuy Yi’s Lucky 88: The Food Court Musical, 2 pm. Flushing Town Hall streams this reading of a play about vendors in a Flushing food court. The hand-pulled noodle guy, 60, is struggling to put his son through law school. He doesn’t know it, but the youth has dropped out and wants to take over the noodle business. The dumpling lady, 50, has mourned her husband’s death and is ready to date again. A 20-year-old female wants to be a Hip-Hop dancer, but she has to work the bubble tea stand to pay for her mother’s chemotherapy.

Oct. 4, I Want To Be A Vet, 1 pm. Alley Pond Environmental Center streams an educational program for aspiring veterinarians with real animals.

Oct. 8, Literary Thursdays, 4 pm. Queens Public Library sponsors this talk with Connor Towne O’Neill, who has written “Down Along With That Devil’s Bones: A Reckoning with Monuments, Memory and the Legacy of White Supremacy,” which reports on conflicts over monuments to Nathan Bedford Forrest, a Confederate general who was also a plantation owner, slave trader, and Ku Klux Klan Grand Wizard.

Oct. 8, Virtual STEAM Workshop: Clay Creations, 3:30 pm. Lewis Latimer House Museum streams the chance to learn how to make air-dry clay using ingredients that can be found at home. Clay is a natural material made up of tiny particles of rock. When mixed with enough water, it feels like soft, gluey mud. Unlike regular mud, however, clay holds its shape; it can be pinched, rolled, cut, or built up in layers to form shapes of all kinds.

Oct. 9, Undine, 7 pm (ish). Queens Drive-In presents a melodrama about an intense romance which can only do so much to help the woman overcome the considerable baggage of her former affair. New York Hall of Science Parking Lot, 47-01 111th St., Flushing Meadows Corona Park.

Sunnyside Shorts International Film Festival, until Oct. 10. The 15th annual exposition features 76 movies from more than 20 countries, selected from a pool of more than 400 submissions. They’re organized into five themes: Comedy, Documentary, LGBTQ, Narrative, and Miscellaneous. So be prepared to laugh, cry, be amazed, and maybe even eat some Microwaved popcorn. Attendance is $15 for the entire slate, and viewers can vote for their favorite shorts in each of the categories.

Modern Jewish Theologians, In Their Own Words, until Dec. 10. Irwin Goldenberg is a retired Reform Rabbi who worked at Gettysburg College and York College of Pennsylvania before retiring to Forest Hills. He leads these discussions at noon on eight Thursdays: Sept. 24; Oct. 8, 15, 22, and 29; Nov. 12 and 19; and Dec. 10.

Rashid Johnson: Stage, until Fall 2021. This participatory installation and sound work draws on the microphone as a tool for protest and public oratory, while recalling microphones in hip-hop lyrics from the 1980s to the present. It features a yellow powder-coated stage with Johnson’s signature markings. MoMA PS1, 22-25 Jackson Ave., LIC.