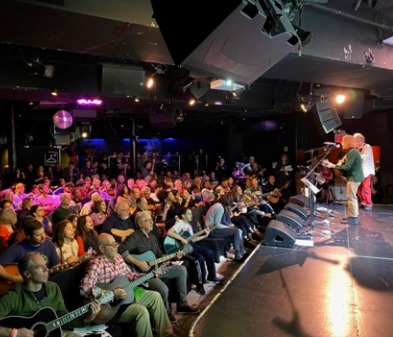 It’s a full and varied week of activities, but they all make the same nod to reality: They’re inside. (What a surprise for February.) Shakespeare, Alice in Wonderland, the New York Philharmonic, Jane Austen, Archie Bunker, and Flash Gordon are among the big names in Queens this week. Discover the talents of Stephen R. Barney Jr., Tommy José Stathes, Jay Jaxson, Phillipe the Penguin, and Phoebe Ballard.

Feb. 7, Urban Campfire, 7 pm. Guitar Mash and the Mayor’s Office of Media and Entertainment present Urban Campfire, an immersive, participatory concert during which renowned guitarists and singer-songwriters share songs and stories. Audience members bring guitars and other acoustic string instruments. Don’t play? Sing along or just hang out. The warm up is at 7 pm. Concert starts at 8 pm. Flushing Town Hall, 137-35 Northern Blvd.

Feb. 8, Opening Reception, 5 pm. The unveiling of “Race and Revolution: Home/Land,” which looks at the Fugitive Slave Act of 1850’s influence on Lewis Latimer’s family, focusing on tactics used to detain, deport, and re-enslave with current practices used by Immigration Customs Enforcement to control the influx of immigrants. It runs through June 14. Lewis Latimer House Museum, 34-41 137th St., Flushing.

Feb. 9, Alice in Wonderland, 1 pm & 4 pm. In this adaptation by Tout a Trac, Alice would rather play and daydream than do her homework, so she hides in her father’s study. One day, she follows a curious-looking rabbit into a wonderland, where she encounters the Queen of Hearts, Humpty Dumpty, Tweedledee and Tweedledum, and Chesire Cat. The second show is sensory friendly and has ASL Interpretation. Queens Theatre, 14 United Nations Ave. S., Flushing Meadows Corona Park.

Feb. 9, The Mark of Zorro, 5 pm. The Paragon Ragtime Orchestra performs the original 1920 score of the silent film “The Mark of Zorro,” a masterpiece with swordplay, romance, and a bit of comedy. The Community House, 15 Borage Pl., Forest Hills.

Feb. 10, Archie Bunker, 7 pm. Jim Cullen discusses, sells, and signs his book “Those Were the Days: Why All in the Family Still Matters.” The book is about the popular TV sitcom that first aired from 1971 to 1979 and was set in a middle class Queens neighborhood. It dared to address such topics as abortion, homosexuality, menopause, racial prejudice, and rape. Rocco Moretto VFW Hall, 31-35 41st St, Astoria.

Feb. 11, We, the Whole People, 7 pm. The composer-performer collective Random Access Music honors the centenary of the 19th Amendment, which extended women’s suffrage throughout the United States. The music is inspired from Susan B. Anthony’s speech following her arrest for voting in the 1872 presidential election: “It was we, the people; not we, the white male citizens; nor yet we, the male citizens; but we, the whole people, who formed the Union.” Plaxall Gallery, 5-25 46th Ave., LIC.

Arrangement for a Silent Orchestra, until Feb. 7. Julie Comnick’s New York debut exhibition is a painting-and-video project that explores the gradual dissolution of culture in contemporary society through the symbolic ruin of a personal and cultural icon, the violin. Gallery One at The Factory LIC, 30-30 47th Ave., LIC.

The African Company Presents: Richard III, until Feb. 9. Forty years before the Civil War, the African Grove Theatre Troupe is ready to stage a production of Richard III in NYC. Then an all-white company scores a big star for its own version. The reaction involves tremendous emotion and poetry. Titan Theatre Company presents the remaining shows as follows: Feb. 6, Feb. 7, and Feb. 8 at 7:30 pm and Feb. 9 at 4 pm. Queens Theatre, 14 United Nations Ave. S., Flushing Meadows Corona Park. 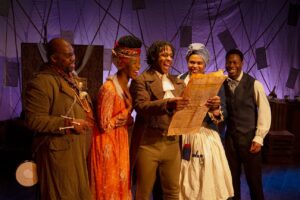