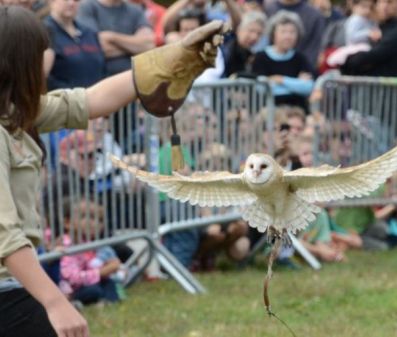 Get up close and personal with birds of prey.

The 19th annual Raptor Fest will spread its wings near the Unisphere in Flushing Meadows Corona Park on Saturday, Oct. 8, from noon to 3 p.m.

NYC Parks Department Urban Park Rangers will interact with at least a dozen falcons, hawks, owls, and ravens in a special viewing area, describing everything from their beaks to their talons to their feathers. At other times, the nature nonprofit Skyhunters in Flight will put on live demonstrations featuring amazing aerial feats, and Wildlife in Need of Rescue and Rehabilitation, an all-volunteer group that cares for sick, injured, and orphaned animals, will organize educational tables.

The Parks Department offers this free event to inform about local avian life and help people understand how and where to find it. Queens – especially the Rockaways and Forest, Alley Pond, and Highland parks — is home to everything from song birds to waterfowl to raptors, especially during the Fall Migration, when feathered flyers from northern areas pass through New York City on the way south to Central and South America.

Kevin Montalvo, who leads the Queens Distance Runners group, jokes that the borough has practically gone to the birds. He reports seeing a black falcon with red feathers in Astoria Park on one jogging expedition, and he frequently marvels at hawk nests inside the Unisphere. Then there was the time he ran past about a dozen chickens on 108th Street in Corona. 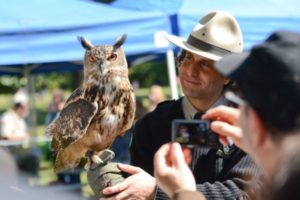