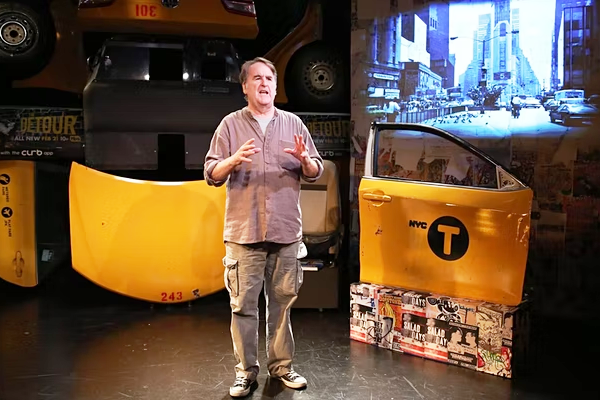 He stars in Off the Meter, On the Record at the Greek Cultural Center in Astoria from Friday, Sept. 23, until Sunday, Sept. 25.

In this one-man show, McDonagh stands among auto parts on stage as he combines jokes with social commentary and storytelling while reminiscing about some of his liveliest yellow cab experiences.

The conversations. The robberies. The pregnant women in labor. The drunkards. The homeless. The super rich. Life before cell phones and Uber. He can chat about almost everything.

McDonagh, who also does professional standup and hosts radio programs on WBAI, will bring Off the Meter, On the Record to Ireland soon.

The Greek Cultural Center was founded in 1974. Located at 26-80 30th St., the venue presents various entertainment and educational programs in Greek and English.

NYIC, which is at 10-40 Jackson Ave. in Long Island City, also presents Ardal O’Hanlon Returns to New York three times from Sept. 29 to Oct. 1. Referred to as one of the godfathers of Irish comedy, O’Hanlon stars on the Irish show Father Ted and had a recurring role on the British-French detective series Death in Paradise. Tickets go from $44.34 to $81.58.

Image: Off the Meter, On the Record