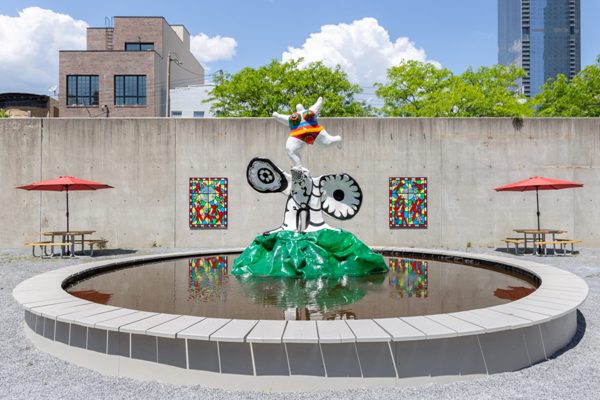 Artists reinvent themselves ─ and so do art venues.

MoMA PS1 has just revamped its outdoor space with exhibitions, seating, and munchies from Mina’s NYC Restaurant. Plus, the Long Island City venue has extended operation hours until 8 pm on Thursdays, Fridays, and Saturdays this summer.

Niki de Saint Phalle’s La femme et L’oiseau fontaine (above), which shows the form of a woman lightly balanced atop a bird, is currently on view in PS1 Courtyard. It’s one of the intrepid French provocateur’s multi-colored, explosively feminist Les Nanas statues that adorn outdoor venues around the world. It’s also part of de Saint Phalle’s larger Structures for Life show, which is on display at MoMA PS1 until Sept. 6.

Visitors can’t miss Rashid Johnson’s Stage, a participatory installation and sound work that is up until autumn. The goal is to recreate a public square where people can express themselves via poetry, music, or straight words, just like at such public squares as Speaker’s Corners in London’s Hyde Park and Harlem’s 135th Street and Lenox Avenue.

Step right up and express yourself (below, far left). Participants’ statements will be recorded and rebroadcast into speakers installed throughout PS 1 Courtyard.

Visitors can also check out Gregg Bordowitz: I Wanna Be Well, which is at MoMA PS 1 until Oct. 11. Named after a 1977 song by the Ramones, the exhibition surveys 30 years of Bordowitz’s life alongside activists, artists, friends, thinkers, and writers. The Queens-bred firebrand underwent a transformation after AIDS blew up in the mid-1980s. Working with New York’s ACT UP (AIDS Coalition to Unleash Power) and several video collectives that he co-founded, he organized protests and advocated for health education and harm reduction.

All images are courtesy of Marissa Alper/MoMA PS1 except extreme left, which is from Parapliue