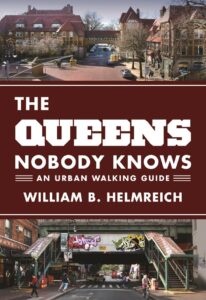 Let’s hear it for William B. Helmreich…and shoe leather.

The Distinguished Professor of Sociology at City College of New York and CUNY Graduate Center allegedly walked every single block in the five boroughs before publishing The New York Nobody Knows: Walking 6,000 Miles in the City in 2015.

The book won the Guides Association of New York Award for Outstanding Achievement in Book Writing, and a few years later, Helmreich did it again in Queens. He took another foot tour — about 1,012 miles — starting in Little Neck and ending in Astoria.

The result is The Queens Nobody Knows: An Urban Walking Guide, which Princeton University Press published this past Oct. 27. With 65 illustrations, 48 user-friendly maps, and plenty of walking tips, the guide mixes history with points of interest, wacky facts, and lessons learned from hundreds of conversations with local residents.

Here’s an excerpt from the Flushing section: “I pass by Maple Playground and see four young men kicking, soccer-style, a small butterfly-shaped object. The game is called jianzi, and it originated thousands of years ago during the Han dynasty.”

Of course, but The Queens Nobody Knows also shares lesser-known borough factoids, such as the tallest tree in NYC (a 133.8-foot-high tulip in Alley Pond Park), an outsider art museum that displays work by people with mental illness (Creedmoor Psychiatric Center in Bellerose), and one of the Big Apple’s last taxidermists (John Youngaitis in Middle Village).

Helmreich was born to Holocaust survivors in Switzerland on Aug. 25, 1945. His family moved to New York City about a year later, and he grew up on the Upper West Side of Manhattan. After a long career as an educator and author, he died due to complications caused by COVID-19 in Long Island’s Great Neck this past March. He wrote many books. Here are a few: The Black Crusaders: A Case Study of A Black Militant Organization (1973); The Things They Say Behind Your Back (1982); The World of the Yeshiva: An Intimate Portrait of Orthodox Jewry (1982); and The Manhattan Nobody Knows: An Urban Walking Guide (2018).