#PickoftheWeek | No need for an air guitar! The crowd rocks with superstars at Urban Campfire in Queens 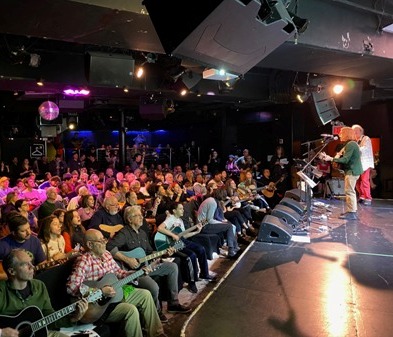 Are you ready to rock and roll in the aisles?

Flushing Town Hall hosts Urban Campfire on Friday, Feb. 7, at 7 pm. (Well, the tune up starts then. The concert is set for 8 pm.)

Organized by Guitar Mash and the Mayor’s Office of Media and Entertainment, Urban Campfire tears down the wall between stage and audience, as attendees join the action. They bring stringed instruments, while some loaner guitars are available courtesy of Recording King. “Chord coaches” help them get seated and tune up. Then it’s time to rock with Guitar Mash projecting lyrics.

Don’t play? Sing along or hang out.

On Friday, Guitar Mash Artistic Director Mark Stewart, who has been Paul Simon’s musical director since 1998, and Carlos Alomar, who worked with David Bowie, will lead the run of show.

The eclectic set-list will include the following:

Tickets are $10, but students pay $8, and teenagers can attend for free as part of an ongoing promotion.

Here’s a list of the performers who are scheduled to join Steward and Alomar on the stage:

“This will be an extraordinary, interactive event,” said Flushing Town Hall Executive and Artistic Director Ellen Kodadek. “I encourage everyone – from novices to professionals, and even those who just want to be surrounded by great music – to bring their guitars or other string instruments or just enjoy this communal experience.” 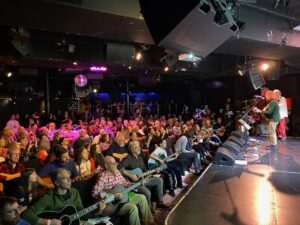