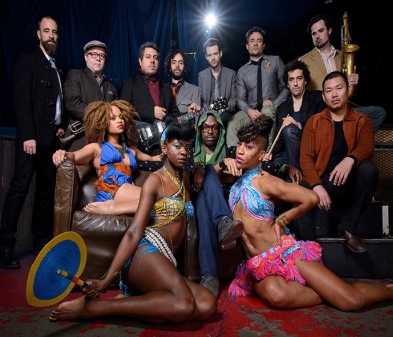 Here’s the recipe for success: begin with two completely different bands, add dance lessons, and cook to taste on the same stage. Then repeat four times.

Spanglish Fly, the only remaining NYC group that is dedicated to reviving and renewing Boogaloo, and Chop and Quench, which features members of the cast and band of FELA! The Musical, will perform at Flushing Town Hall on Friday, April 20, starting at 8 pm.

With 12 musicians, dancers, and “party animators,” Spanglish Fly plays music that was everywhere in Spanish Harlem and the Bronx in the 1960s (i.e. pool halls, transistor radios, open car windows). It infused African-Cuban rhythms with an urban/NYC/soul feeling.

Chop and Quench specializes in Afrobeat, a hybrid genre of West African sounds, Funk, and Jazz that Fela Kuti made famous. Members were part of the long-running Broadway show about the Nigerian performer’s life.

The night, entitled “Latin Boogaloo meets Afrobeat,” will begin with dance lessons for both styles at 7 pm. Then each band will play a set. Then they will join together on stage and jam.

It’s going to be a wild and fun party, but it will also launch Flushing Town Hall’s five-part Global Mashup series. After the April 20 extravaganza, the historic performing arts center will present Egypt meets Haiti on May 4; Mexico meets Guinea on May 18; Balkans meets El Barrio on June 1; and Texas meets Peru on June 15.

In Global Mashup 2, Zikrayat will play Egyptian music ranging from bellydance numbers to improvisations, and the Agoci Band will combine hip-hop, roots, and calypso flavors with Haitian compas.

In Global Mashup 4, Raya Brass Band will do soul-shaking Balkan wedding melodies, and Spanglish Fly will return with its irresistible Boogaloo grooves.

In the final one, Global Mashup 5, Brian Clayton and The Green River Band will do a little bit of country, while Corina Bartra will provide infectious Afro-Peruvian music.

All Global Mashups begin with dance lessons at 7 pm, followed by concerts at 8 pm. They all cost $16, although Flushing Town Hall offers free admission to teenagers. 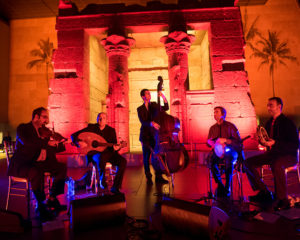