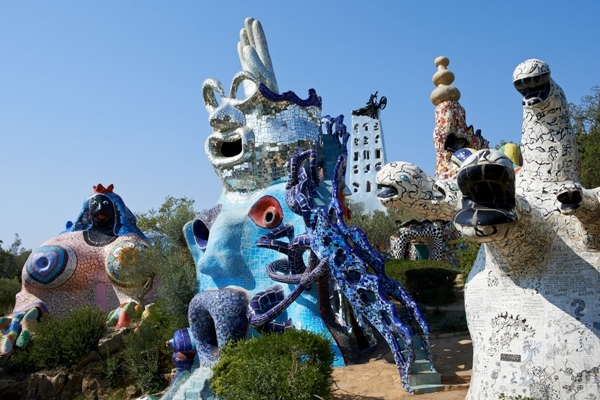 Niki de Saint Phalle is famous for Les Nanas, multi-colored, explosively feminist statues that adorn outdoor venues around the world. However, the French artist never had a museum exhibition in New York City.

This injustice ended on March 11, when MoMA PS1 unveils Structures for Life, a display of more than 200 works she created from the mid-1960s until her death in 2002. (Some pieces have never been exhibited.)

Structures for Life takes a special look at Saint Phalle’s large-scale outdoor sculptures and architectural projects, including Golem, a playground in Jerusalem; Le Dragon de Knokke, a children’s playhouse in Belgium; and La fontaine Stravinsky, a series of abstract sculptures in Paris.

Plus, the expo includes photographs, drawings, and models related to Tarot Garden (both images), an architectural park in Italy with structures based on the 22 Major Arcana of the tarot deck that she worked on from the late 1970s until her death.

As part of the fun, Susan L. Aberth, a leading scholar of occult art and surrealism, and Rachel Pollack, a writer and tarot practitioner, will offer a lecture on tarot as a philosophical tool for navigating life’s twists and turns on April 8 at 7 pm.

Located at 22-25 Jackson Ave. in Long Island City, MoMA PS1 is open from noon to 6 pm, Thursday through Monday, and until 8 pm on Saturdays. The suggested admission is $10.

Born Catherine Marie-Agnès Fal de Saint Phalle near Paris in 1930, the artist had a difficult childhood that included being raped by her father when she was 11 years old. She battled depression and anxiety her whole life and always maintained that creating art was great therapy.

After a career as a fashion model during her teens, she switched to art in her 20s even though she had no formal training. Her breakthrough came with the Tirs (Shots) series in 1961. She would paint on a canvas and attach polythene bags of paint with a thick plaster surface, aim a firearm, and then blast plaster projectiles at it from close range to create explosions of color. (She would invite people to throw darts or shoot at them, too.) The process helped her deal with inner demons, she said, while the results attracted international acclaim. 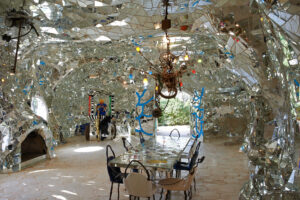