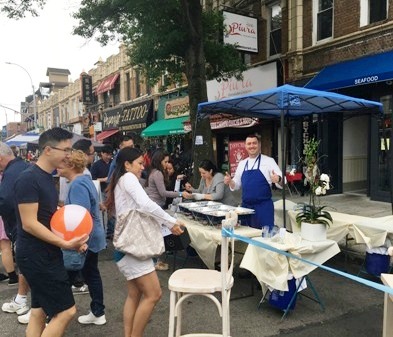 Math is hard, but it works out to less than a dollar per restaurant.

Pay $30 and try samples from more than 35 eateries during the Bell Blvd Food and Music Fest on Sunday, May 19, from 2 pm to 6 pm. (Cuisine options include Cajun, Chinese, French, Greek, Indian, Italian, Japanese, Korean, Spanish, Tex-Mex, Thai, and Vietnamese.)

Organized by the Bayside Village BID, this second annual outdoor event will unfold along seven blocks of Bell Boulevard, mostly between 38th and 43rd avenues. Local businesses and nonprofits will set up tables and chairs outside their storefronts to serve and chat with strollers.

But it’s not all food. Some bars will offer signature cocktails and special beers, and there’ll be plenty of fun and games, too, with live music on every block, including K-pop, Rock, Jazz, Country, and the American Songbook. At some spots, attendees will try their luck at Skee-Ball, mini-golf, shuffleboard, and beach ball volleyball in the middle of the street, which will be closed to vehicular traffic. Plus, local youth groups will perform throughout the day, and the Bayside High School Key Club will unveil an eight-food-wide spirograph created specifically for the event.

Editor’s note: The $30 flat rate is for advance tickets, while children under age 12 can attend for $12. Purchasers receive a “passport” that gives them access to the restaurants. Same day prices are $40 regular and $15 for youth. The entertainment is free and open to the public. 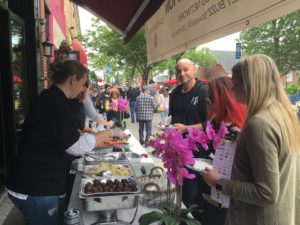