#PickoftheWeek | Discover the Wonders of 18th Century Cooking on Feb. 27 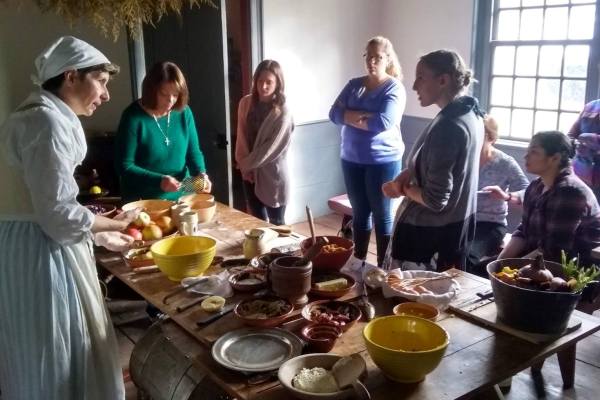 Chris Lord-Barry, an expert in classical cookery and early North American foodways, leads this virtual demonstration from Queens Farm’s Adriance Farmhouse. She even lights an open fire in the historic structure’s kitchen.

Squash pudding and carrot puffs are on the menu, along with other dishes that were popular in the 1700s and seasonal ingredients. Of course, Lord-Barry uses traditional utensils and no Microwave. (It’s Old Skool, but the recipes can be adapted for vegans!)

General admission is $30, and participants receive a supply list, recipes, and Zoom details upon registration.

There was no refrigeration in the 18th century, and neither supermarkets nor FreshDirect existed. Transportation consisted of riding horses and walking, and most of what is now New York City was farmland. Plus, most residents were from Dutch or English cultures whose cuisines were mixing with traditions from the Matinecock and Lenape people who had been there for centuries.

Plus, the diet was greatly influenced by whatever fruits and vegetables were in season along with meat from animals that could live in the local climate. Stewed mutton hutspot, barley porridge, and hearty rye breads were common while buttermilk and tea were popular beverages. Sweet treats included honey cake, gingerbread, and olie-koecken, deep-fried dough with raisins and apple pieces.

Chefs used utensils such as the S-Hook, the cast iron Bake Kettle, and the Spider Pan, which had legs. The Toe Toaster, which had slats where sliced bread could be placed near flames, was also common. The Boiling Bag was a square of linen used to wrap pudding.

Queens Farm, whose address is 73-50 Little Neck Pkwy. in Glen Oaks, is NYC’s only working farm. The roughly-47-acre property includes livestock and planting fields, but it’s also a historical site that dates to 1697. Programs include a county fair, sheep shearing, and even an annual motorcycle show. 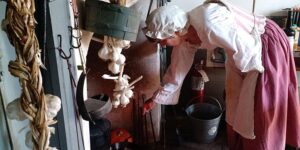