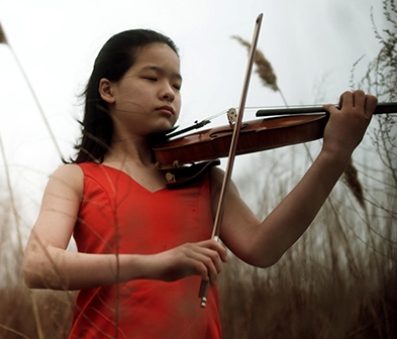 A love-struck hamster chases the object of his affection around the world. A Somali boy rues becoming a pirate or a fisherman. A man and a woman in an assisted-living facility fall in love again … and again … and again.

Asbury Shorts USA is getting ready to present two hours of high energy comedy, drama, animation, and emotion at Flushing Town Hall on Friday, October 21, at 7:30 pm. Tickets are $12.

The group never reveals its entire schedule ahead of time, but attendees will definitely see The Little Violinist (photo), which depicts a garbage man in Manhattan’s Chinatown who is hiding a dark secret from his 11-year-old daughter. He decides to confess his sin after her beautiful violin-playing sends him on an emotional roller coaster ride. Yang Wang created this mini movie while studying at The School of Visual Arts in Manhattan. She has a conflict, but her mother and two of the actors will be on hand.

Another definite is Fait d’Hiver (Gridlock), a 2001 dark comedy by Belgian director Dirk Belien about a young man who uses a mobile phone to chat with his wife from his car. Hilarity ensues as he tries to make sense of the cryptic call while stuck in traffic. Is she having an affair?

Rust, which won Best Short at the 2015 Shelburne International Film Expo in Canada, is also guaranteed. Directed Ben Proudfoot, this documentary follows a Nova Scotian artist who incorporates rusted metal into his sculptures.

Founded by New York Institute of Technology graduates as the Asbury Film Festival in 1980, Asbury Shorts USA is the world’s longest-running short film travel show. It has shown at Central Park’s Summer Stage, London’s Royal Festival Hall, The Lakeshore Players Theatre in Chicago, the Museum of Fine Arts in Boston, and Visions Cinema in Washington, D.C., among other sites.