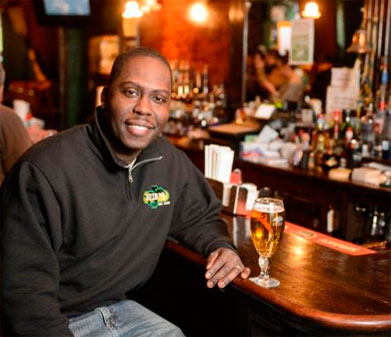 Hands down (and forks up), Queens is one of the most eclectic places in the world to dine, and some of the most unsung establishments are just south of Union Turnpike. There are only so many words I’m allowed in this article, so I’ll highlight a few. One area, which is known as “Little Guyana” and centered on Liberty Avenue and Lefferts Boulevard, has authentic products just like the ones on the shelves in Guyana, India or Trinidad. They feature the strong smells of a local market in a tiny shopping village with the hustle and bustle being just the same. Television screens of baseball football games are replaced by cricket and Budweiser and IPA are replaced by rum and Red Stripe beer. You’ll forget you’re in the United States. How about the best jerk chicken I’ve ever tasted outside of my native Jamaica? Located by Farmers and Linden boulevards in the heart of southeast Queens is The Smokehouse (tip: order by phone, the wait can be long). After you’ve tried them all there’s something uniquely special and comforting about an All-American burger and a beer in a cozy neighborhood bar-and-grill where strangers become friends. Taste the Goodfella Burger at Neir’s Tavern in Woodhaven. It’s a unique concoction of grilled tomato, lettuce, melted pepper jack cheese, sautéed onion, and a fresh hand-made patty nestled between a toasted brioche bun from a baker just 15 blocks away. Rumor has it that customers burst out in the “Star Spangled Banner” after eating this burger…”O’er laaaand of the freeeeeeeeee and the hoooooome of the braaaaaaaaaaaaaave!!!!!!”

I must highlight the place that embodies history and community in one location: Neir’s Tavern. It’s the borough’s oldest bar-and-grill, as it opened in 1829. Queens Historical Society Curator Richard Hourahan did some research and found that it could be the oldest continuously operating tavern in the United States that’s still located in the same place where it opened (sorry, Fraunces Tavern). It’s also where the world famous “Goodfellas” and the Ben Stiller-Eddie Murphy movie “Tower Heist” were filmed. How did this begin? The largest and most famous hippodrome of its time, Union Course Racetrack, opened in 1821, in Woodhaven. Due to the large crowds it drew, a local investor decided to open a bar across from the entrance in 1829. This bar is now Neir’s Tavern. The races became so popular that a newspaper once wrote that New York City was empty because everybody was at Union Course. The oval closed in the 1860s amid mounting, pre-Civil War violence, but Neir’s Tavern lived on by transitioning into a bar and social hall. It had one of the country’s first bowling alleys and a beautiful ballroom with a wraparound balcony where Mae West got her start.

I suggest a stroll in my neighborhood, Saint Albans, which encompasses the Addisleigh Park historic district. You can see the homes of jazz greats John Coltrane and Lena Horne, and baseball legend Jackie Robinson, among so many others. One more. “Let’s Wander in Woodhaven” should be the marketing slogan for this awesome locale. There are so many places with historical markers that you can’t help but accidently meander into something special. One of the country’s few landmarked merry-go-rounds, Forest Park Carousel, is there. How about the site Fred Trump (The Donald’s father) made his first real estate investment? Then you can roam into Cypress Hills cemetery, where Mae West, Jackie Robinson, and many other notable figures are buried. After you tire, check into the storied Neir’s Tavern for a cold one and ask for the nickel tour!

Loycent Gordon is a firefighter, a civic activist, a philanthropist, and – believe it or not – the owner of Neir’s Tavern.