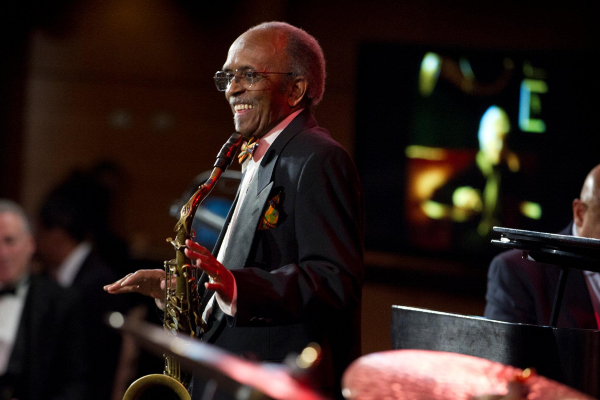 The long-time Corona resident died at age 93 in 2020, but he lives on via his music, legend, and the Jimmy Heath Scholarship Fund at Queens College.

His legacy will be properly celebrated this weekend with the Jimmy Heath Scholarship Fund Concert at Queens College’s LeFrak Concert Hall on Saturday, May 21, at 7 pm.

One of Heath’s former students, Antonio Hart, will present the concert in person and via livestream. Hart is a Grammy-nominated saxophonist and composer who also directs the Queens College Jazz Studies program that Heath founded in 1986.

The audience can expect many performances by talented musicians while a video montage of Heath’s life and career shows on a screen behind the stage.

In-person tickets are $25, but students can attend for $10. A $10 minimum donation is expected to watch via livestream. Proceeds will benefit the Jimmy Heath Scholarship Endowment Fund.

Born in 1926 in Philadelphia, Heath was the middle brother in a talented trio. Percy played bass, while Tootie was a percussionist. In 1948, a 21-year-old Heath performed in the First International Jazz Festival in Paris. This led to a 50-year-plus career that included sharing stages with Charlie Parker, Dizzy Gillespie, John Coltrane, Max Roach, Miles Davis, and Wynton Marsalis. He performed on more than 100 albums, including seven with The Heath Bothers, and wrote more than 125 compositions.

“This is a wonderful tribute to an iconic musician, composer, educator and mentor,” stated Queens College President Frank H. Wu. “We joyfully join with his family, friends and all New Yorkers in celebrating Jimmy Heath’s dynamic music, wonderful life and enduring legacy. His cultural and educational contributions will continue to thrive through the establishment of the Jimmy Heath Scholarship Fund at Queens College to help support students in their quest to become a part of the next generation of great musical artists.”

LeFrak Concert Hall is located at 153-49 Reeves Ave. in Flushing. Several parking lots are nearby.

Editor’s note: In a way, the homage will begin on Friday, May 20, at 2:30 pm, when the New York City Council adds the name “James Edward Heath Way” to the intersection of 114th Street and 34th Avenue.

Images: Kupferberg Center for the Arts