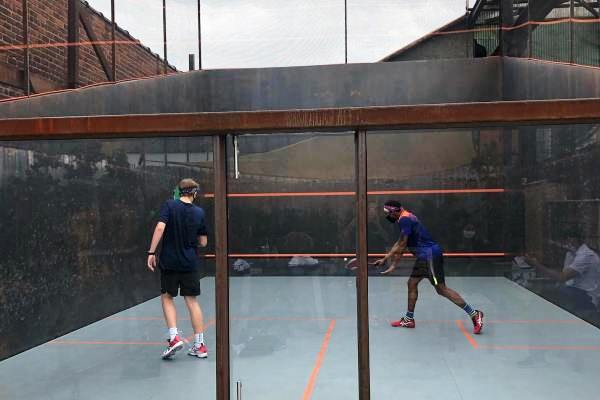 First question: What is squash?

The racquet sport involves hitting and chasing a small rubber ball inside a four-walled court. Invented in a London prison in the 19th century, it has long been a High Society pastime in the United States, especially popular among Wall Street types and New Englanders.

But that’s changing, and the center of the New Squash World is in an Industrial Business Zone in West Central Queens.

Maspeth Welding is a private construction company that specializes in structural steel and miscellaneous metals, but the property also boasts an open-air squash court. Completed in 2020, it’s a regulation-size for singles (doubles is played in a distinct, cavernous space) with a glass back wall and three steel walls. The floor is wood panel suspended on more steel.

There’s no roof so there are rain delays. Snow delays, too!

The facility is a dream come true for Robert Gibralter, the director of Maspeth Welding Arts, an arts program based at Maspeth Welding (59-30 54th St.) that collaborates with Queens Council on the Arts on various projects. He says that steel makes for a truer bounce of the ball than wood and glass, the traditional court materials. Plus, he simply hoses down the surfaces and dries them off with a squeegee after playing and everything’s clean for the next match.

Currently, the court is used mostly by Maspeth Welding workers as part of an informal company wellness program. But Gibralter hopes to convince other Queens manufacturers to build similar courts and launch an industrial league. He’s also in conversations to build courts in other cities around the world.

Watch out. He might revolutionize a sport that has always been played indoors under roofs.

“Hands down the coolest court I’ve ever played on,” states Adrian Grant, an Englishman who was once ranked number 9 in the world, on the TrueSquash website. “The guys @maspetheweldingarts have created a masterpiece and it plays just as good as it looks. I sense something exciting on the horizon.”

Squash and Education Alliance Executive Director Tim Wyant adds: “The artful attention to detail and blend of natural and industrial design are striking. And it’s simply surreal to feel the breeze and see the sky while playing a game we’ve always thought of as being for the indoors. Visiting Maspeth is to expand your conceptions about what’s possible for squash.” 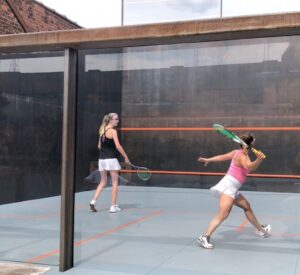