#NewsFlash | It Happens Every Year! Queens Has the Best Open House New York Events This Weekend 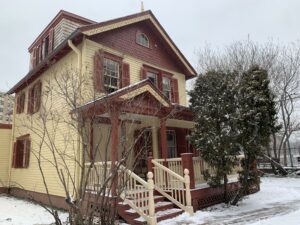 Each October, Open House New York organizes a citywide exploration of beautiful, historic, and industrial buildings. The tradition continues this year, although with a lot of virtual tours and socially distanced events. And as always, Queens has the best stuff with 17 distinct options. Many plans have not been disclosed yet, but here are two definite ones.

The Lewis Latimer House Museum will premiere a six-minute film on its namesake all weekend.

Latimer (1848–1928) was an African-American inventor who worked with Alexander Graham Bell on the telephone and Thomas A. Edison on the lightbulb. The true Renaissance Man was also a self-taught master draftsman, expert on patent law, poet, painter, multi-instrumentalist, and co-founder of the Unitarian Universalist Congregation of Queens. Though born in Massachusetts, he lived the last 26 years of his life in a Queen Anne style Flushing house that remained in his family until 1963. It’s now a museum dedicated to education and promoting African-American contributions to technology.

The free video launches on Friday, Oct. 16. Then, it’ll be on view on the Latimer webpage from noon to 5 pm this Saturday and Sunday.

Meanwhile out in Jamaica, King Manor Museum will stream Paper Marbling and Library Tour on Saturday, Oct. 17, at 1 pm.

Director of Education Brittany Lester will teach “paper marbling,” an ancient craft that creates swirl patterns for bookmarks, stationary, and covers. (She’ll use household items such as shaving cream, food coloring, popsicle sticks, and cardboard.) Rufus King — the youngest signer of the United States Constitution, a senator for almost 18 years, and an ambassador to Great Britain — was an avid reader who treasured his collection of almost 4,000 books, many of which were decorated via paper marbling.

Participants will then take a live virtual tour of his library with a Q&A session.

From 1805 to 1896, Rufus and his equally prominent descendants lived in King Manor, a three-story, three-chimney mansion with clapboard windows on about 150 acres in Jamaica. The dwelling is now a museum. 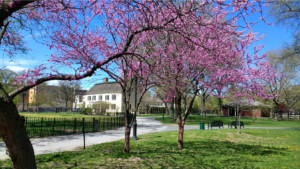