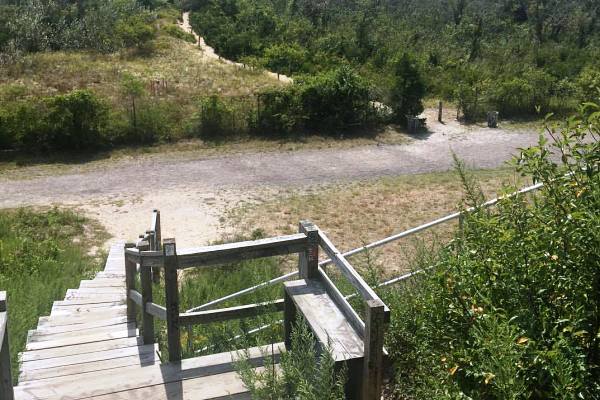 Here’s the chance to take the western tip of Rockaway by land, sea, air, and augmented reality.

The Jamaica Bay-Rockaway Parks Conservancy and the Art Production Fund will host a walking tour of Fort Tilden’s remnants and natural areas with enhancement from Nancy Baker Cahill’s Liberty Bell on Saturday, June 26, at 5 pm.

First the scene. Established in 1917 in Breezy Point, Fort Tilden once housed antiaircraft missiles to defend New York City from attack. It was decommissioned in 1974 and placed under the National Park Service’s aegis. The military installation, which is named after 19th century New York State Governor Samuel J. Tilden, lies by a freshwater pond and maritime forest. An observatory deck provides breath-taking views of Jamaica Bay all the way to Manhattan.

Now the activities. The tour will begin and end at the Rockaway Artist Alliance’s Studio 6 & 7 Gallery Building, which is directly across from the baseball field. Participants will be able to explore the garrison’s remnants and the incredible flora and fauna, while also learning about the area’s history and influence. Then there’s Liberty Bell, a 3D animation of an abstract, swaying bell awash in red, white, and blue with a viewing area of roughly 37,000 square feet.

Confused? The 360-degree piece – commissioned by APF in partnership with 7G Foundation and JBRPC — appears in the cyber-ether for about 90 seconds. Featuring richly textured brushstrokes, it hovers above and beyond viewers before swaying and slowly dissolving. At the same time, the sound of a bell’s toll goes from harmonious to atonal to melodic, resembling loosely knitted threads that unravel and come together in an uncomfortable, but cohesive moment.

The tour is free, but RSVP here.

Before the tour starts, participants should download Cahill’s 4th Wall App for free from the App Store or Google Play. (It works on iPhones 6s and above, any iPad with AR capability, and Androids with AR Core.) Then they can use Wifi to view Liberty Bell, which is geolocated over the Atlantic Ocean. It’s visible from The Rockaway Hotel and the following public spots.

Rockaway Beach at Beach 108th Street and Shore Front Parkway: Head slightly toward the dunes and water. The piece appears over the ocean all the way to Beach 106th Street.

Rockaway Ferry Landing: Enter Beach Channel Drive at Beach 108th Street and stand to the left of the landing at the water’s edge. The piece appears over Jamaica Bay.

Shirley Chisholm State Park: This is actually in Brooklyn. Enter via Fountain Avenue and follow signs to Fountain Pier. The piece appears over Jamaica Bay. It’s also viewable from the park’s Skybowl.

Editor’s note: After downloading the app, make sure to “Allow Access” to photos, microphone, camera, and location. Make sure device sound is on. 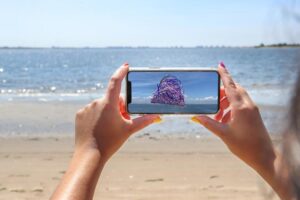