#MonthlyPicks | What Do A Development Director + An Elected Official Love About Queens? 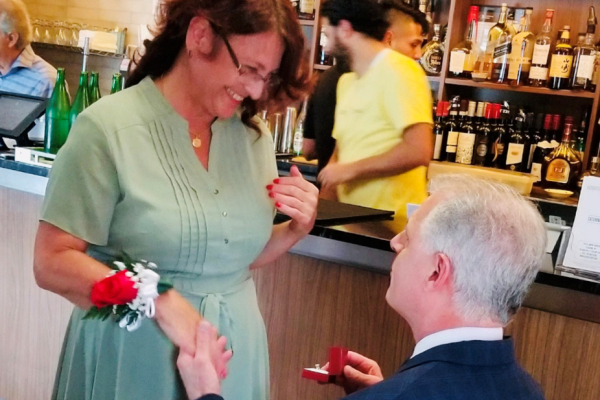 Wendy Phaff Gennaro is the Director of Development at Queens Centers for Progress, a nonprofit that supports individuals with intellectual disabilities. Her husband, City Council Member James Gennaro, represents NYC District 24, which stretches from Jamaica to the Long Island Expressway in central-eastern Queens.

Here’s their story of love — for each other and the district — in her voice.

Besides offering the best in terms of food, locale, and history, District 24 is our home. It’s where we met, fell in love, got engaged, and started our life together two years ago. And lucky for us, it’s packed with every type of food imaginable — whether walking down Hillside Avenue with its delicious array of South Asian cuisine or up Main Street’s Kosher Corridor in Kew Garden Hills, there’s no shortage of great eats. But one place holds a special place in our hearts…

One August night, while having dinner in my favorite local restaurant, Acquista Trattoria, Jim walked in to pick up take-out. Turns out, it was his favorite place, too. We exchanged pleasantries, but not phone numbers. Months later after connecting on Facebook, we returned for a friendly dinner. Three years later, Jim got down on bended knee and proposed to me in the same spot where we had met. Acquista has always been our go-to for great Italian cuisine and the friendly, family-oriented, neighborhood vibe is always welcoming. It makes it not simply good, but great. You can’t go wrong with anything on the menu, and we’ve never had a bad meal there.

As our lives got busier, we were delighted that a healthy take-out joint opened on the Turnpike (that would be Union.) Cooked Klean’s options are so simple, yet so yummy. Our standard order is a “Make Your Own Bowl” with salmon, chicken, or steak. These meals are packed with quinoa, sweet potatoes or brown rice, and a choice of vegetables. The toppings are endless, and there’s a choice of different sauces that make the meals addictive. Share the bowls. There’s plenty of food.

When it comes to breakfast, there’s only one place in the district to go…if you can get a table, that is! Smile of the Beyond on Parsons Boulevard is a vegetarian diner run by disciples of Sri Chinmoy, a guru who established an ashram in Jamaica Hills in the 1970s that’s still flourishing today, even though he left the human world in 2007. The menu is broad, and everything is fresh. My favorite is the Huevos Rancheros, while Jim sticks to the Breakfast or Pancake Special. The food is THAT GOOD, and the atmosphere is inspiring with cheerful artwork by Sri Chinmoy. The soothing, sky-blue walls give the place an ethereal aura.

My favorite morning run route is through beautiful Maple Grove Cemetery. Though relatively small, this oasis that borders District 24 has headstones and monuments dating back to 1875, when it opened. In the middle, a turtle pond emanates serenity. It’s peaceful, and a delightful place to meander. The Friends of Maple Grove Cemetery group presents concerts and great programs year-round. New York Knicks fans should know that Anthony Mason is buried there. He’s right next to Syracuse hoops legend Dwayne “Pearl” Washington.

Jim and I like Captain Tilly Park in Jamaica Hills. With a kettle pond, known as “Goose Pond,” in the center and lush grounds, it’s a beautiful little oasis and a lovely place to walk and enjoy nature and wildlife. For a real treat, nearby Jamaica High School has spectacular architecture. The landmark’s imposing stature is worth seeing.

When you want something sweet, the obvious place to go is Lulu’s Bakery a few blocks from St. John’s University. Oh. My. Gosh. Where to start? Pastries? Breads? Cakes? Lulu’s is our birthday cake source for the family and the office. Go for the cake with chocolate mousse and cannoli filling, frosted with light buttercream. Grab a cup of coffee while you’re there. It’s delish!

I would be remiss not including Aigner Chocolates in Forest Hills. Though not in District 24, I work at Queens Centers for Progress, which IS in our district, and the Aigner owners, Rachel and Mark, have been so generous to the residents in our group homes. The chocolates are incredible, as is everything in this adorable store. They had me at nonpareils, and Queens Tourism Council Director Rob MacKay says they make the best licorice on Planet Earth. Their service and commitment to the community make Aigner a worthy business to support.

The most beautiful historic site in District 24 is King Manor and surrounding Rufus King Park. This slice of history on Jamaica Avenue was the home of Rufus King, a senator for almost 18 years, ambassador to Great Britain, and an early voice in the anti-slavery movement. From 1805 to 1896, King and his descendants raised livestock and sowed apples, barley, corn, peaches, potatoes, strawberries, and wheat on about 150 acres there. King Manor is a three-story, three-chimney mansion with clapboard windows that was built in 1730. Visit and you get a genuine appreciation for life in the 1800s. Lovingly restored, the house is also a place where local organizations show art and provide educational opportunities for the community.  The venue hosts an annual naturalization ceremony on Sept. 17, which is Constitution Day. It’s the final step in the process, and the immigrants swear allegiance to the United States and receive naturalization certificates in front of a federal judge. Afterward, they can legally vote, serve on juries, apply for a passport, and enjoy all other rights and privileges of a US citizen.

Hope to see you around the neighborhood!