#MonthlyPicks | What an Irish Legend Loves About Queens 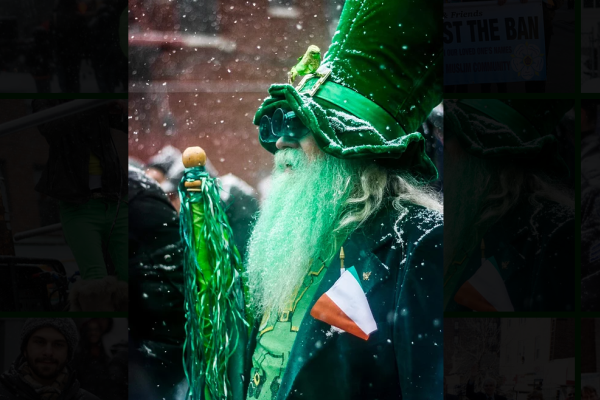 As St. Patrick’s Day is on March 17, we asked a cara maith (good friend in Gaelic) to provide the MonthlyPicks. Here’s how the Irish Leprechaun responded.

Sláinte! Ah, there’s so much to do in County Queens that it’s hard to know where to start. But I’m the lucky one because my good mate, Queens Chamber of Commerce President Tom Grech, has put together Queens Best, which features “All the best that Queens has to offer,” as he’ll tell you.

Many restaurants offer takeout and delivery, so why not consider one for a little corned beef and cabbage? Donovan’s in Woodside and Donovan’s in Bayside are Irish twins with fantastic pub grub and pints. But as much as I love Irish fare, one can’t live on it alone. So Titan Foods in Astoria is The Place to go for all things Greek. It’s kind of like a trip to Athens, and who knew there were so many types of feta cheese? The Nourish Spot in Jamaica makes great smoothies. I favor the ones made with wheatgrass — they come in lovely shades of green! In Rockaway, Cuisine by Claudette is also a welcome spot for a diminutive supernatural pixie like me. The bread pudding would do me mum proud!

We won’t be able to have parades in honor of St. Patrick’s Day this year, but we can go online to watch Sunnyside’s St. Pat’s for All, while the Rockaway Beach organizers will stream parades past. As for wandering, pots of gold are hard to come by these days, but window shopping on 74th Street in Jackson Heights is always fun. Food, clothing, and jewelry from far corners of the world are like taking a trip to the other side of the rainbow.

Many 69th New York Infantry Regiment soldiers who died in the Civil War are buried in Calvary Cemetery, which stretches from Long Island City to Maspeth. The regiment consisted mostly of lads who left Ireland during the Great Famine seeking a better life in the United States. When the Roman Catholic graveyard opened in 1848, it was surrounded by farms. Today, it’s a tranquil spot where we can remember the brave immigrants who made the ultimate sacrifice for their new country.

About the author: He comes and goes as he pleases, but the Irish Leprechaun has a special spot in his heart for Queens. Tom Grech works very hard with the Queens Chamber of Commerce. In his spare time, he loves to travel with his wife and two kids, attend Mets games, and smoke an occasional cigar.

Image: St. Pat’s for All