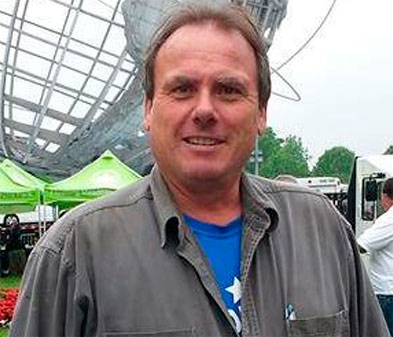 I’m a proud neighborhood guy who has lived in Glendale all my life. I like to support my community by dining in local restaurants at least twice a week. Lucky for me, there’s so much great food in my area that I’ll never get bored. My family is Gottscheer, which is a Germanic ethnic group from a region that was once part of the Austrian empire and then Yugoslavia and Italy. The cuisine is fantastic. When I want some “Gottscheer Soul Food,” I head to Gottscheer Hall on Fairview Avenue in Ridgewood. It’s a nice place with hanging chandeliers, plush carpeting, mirrored walls, and exceptional chefs who take pride in making Gottscheer cuisine. I usually get krainerwurst (kind of like kielbasa) and sauerkraut on rye bread that I wash down with a nice glass of Spaten beer. Glendale’s Zum Stammtisch is famous for its schnitzels and large portions, but it also makes an out-of-the-world prime rib on weekends. You can finish with chocolate mousse and asbach coffee. I also head to Atlas Park to get pastrami on rye at Manor Oktoberfest. Many people only know about the Forest Hills location, but the Atlas Park restaurant is great, too. In fact, I’ve never had a bad glass of beer there, and trust me, I’ve imbibed much Spaten Oktoberfest on site. After the Saturday Mass at St. Pancras Church, my wife, son (who is an altar boy at that 4:30 pm service), and I like to stop by The Avenue Restaurant on Myrtle Avenue in Glendale. They got great calamari and wings. Speaking of frutti di mare, Ridgewood’s Antica Trattoria has great calamari with mussels. Plus the pizza, tiramisu, and espresso are absolutely top notch. Just a few shops up on Fresh Pond Road, Corrato’s has the best Sicilian slices in the borough.

Cypress Hills Cemetery is a beautiful place. Check it out for the trees and sculptures, but it is also the final resting place of such great Americans as Jackie Robinson and Mae West. Harry Houdini is nearby at Machpelah Cemetery, and Joshua Lionel Cowen, who manufactured Lionel trains and railroads, is buried in Union Field Cemetery in Ridgewood. (My father and I used to bond over Lionel trains.)

I could spend all day on the back nine at the Forest Park Golf Course. It’s a little-known links paradise. It’s so picturesque that people who go there for the first time can’t believe it’s in New York City. I hate taking a cart, so it’s also a great place to lower your cholesterol.

I’ve been going to Eddie’s Sweet Shop in Forest Hills since the 1970s. I take my wife and son there for a nice treat on a hot Sunday afternoon. My favorite: mint chocolate chip with hot fudge. Frank A. Kotnik Jr. is a blacksmith for the NYC Department of Transportation. He’s a past president of the Glendale Civilian Observational Patrol, a volunteer group that is currently celebrating its 40th year of being the “eyes and ears” of the 104th Precinct. He’s also a Democratic leader of the 38th Assembly District.