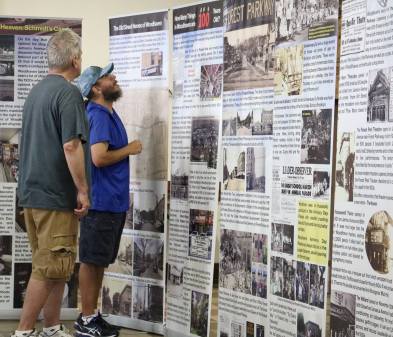 Queens residents often make history, but here’s a chance to study it.

The Museum of Woodhaven History opened on May 3. It’s actually a pop-up exhibit at Woodhaven Manor at 96-01 Jamaica Ave.

Created by the Woodhaven Cultural & Historical Society, the display consists of 25 six-foot-tall panels containing photos, newspaper prints, writings, and other tidbits that inform on the neighborhood’s past. Visitors can simply walk around the large catering hall and read the panels at their leisure.

They will find information about the Cyclone of 1895, which destroyed a two-story brick schoolhouse and killed a newlywed 16-year-old woman; Dexter Park, where semi-pro and Negro League baseball teams played; John R. Pitkin, who founded and named the community; Neir’s Tavern, which is the oldest bar in the country that has continuously operated at the same place without moving or burning down; and the Union Horse Race Track that had its heyday in the 1880s. They’ll also learn about famous locals, such as actor Adrien Brody.

The panels, which were funded by the City Council and the Citizens Committee for New York City, are easily portable, so the historical society can take them to local schools, street festivals, and other community events once this exhibition ends.