#InTheLoop | This Dystopian Play Is Hilarious 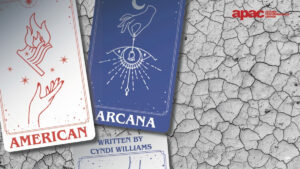 Things are not going well in the United States. Violence is spreading so fast and so far that even high society ladies in wealthy pockets of suburbia are buying guns.

It’s survival of the fittest with crumbling infrastructure, poison water, lost planes, gunfire, and the worst of the worst: political ads. The characters are an eclectic group that includes a tattoo artist, a pregnant Gospel singer, a floral designer, and a conspiracy theorist. They deal with an unraveling society while the president — represented by a life-sized puppet in military duds – spews empty political double-talk.

The show goes on with a hybrid format. The actors – Joanna Carpenter, Arlene Chico-Lugo, Christine Donnelly, Caitlin Duffy, Ian Campbell Dunn, Tom Green, Natasha Hakata, John C. Hume, Brandon Jones, Brynne McNamimie, Peter Romano, Mahima Saigal — present their segments live and via taped recordings from around the country. (The Oct. 26 show is an encore that will be all recordings.) 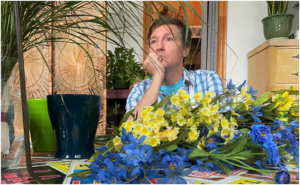