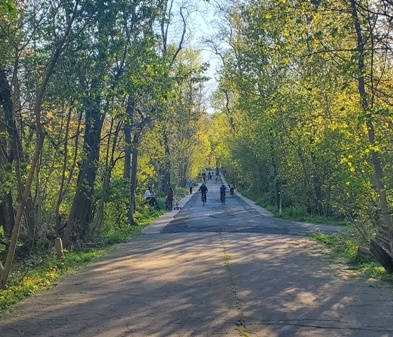 It was the first highway to have bridges and overpasses in the entire United States and the first reinforced concrete connection between New York City and Long Island. And it was in Queens! (In fact, some sections are still in the history-rich borough.)

In the early 1900s, William K. Vanderbilt II, a great grandson of shipping and railroad magnate Cornelius Vanderbilt, became obsessed with a new invention: the automobile. He was still in the family business as head of New York Central Railroad, but he dedicated his free time to speed, even breaking the world record by driving 92 mph in 1904.

The scion founded the Vanderbilt Cup, a professional car race, in Long Island, but after a spectator was killed in 1906, he needed to create a safer place to zoom around. At the same time, his family wanted a quick way to drive from their Manhattan apartment to their Long Island estate.

Promising Gold Coast investors that it would increase their property values, William spearheaded a three-year effort to create the Vanderbilt Motor Parkway, which officially opened on Oct. 10, 1908. About 22 feet wide, it stretched for 48 miles from Fresh Meadows in Queens to Ronkonkoma in Suffolk County.

Vast swaths of Queens were farmland then, and few people could afford cars. So for many years, VMP was used mainly by extremely wealthy individuals and professional racers. It got the nickname “Rumrunner’s Road” during Prohibition, as it was a favorite route for bootleggers.

William installed 12 tollbooths so he could pay back his investors, but the private thoroughfare hit a dead end after powerful urban planner Robert Moses refused to incorporate it into the Grand Central Parkway, which opened in 1933. Even after reducing the toll, William couldn’t make ends meet, eventually returning the land to the state to cover unpaid back taxes. VMP closed on Easter Sunday in 1938.

Most of it was covered for residential construction, but these days a roughly two-mile remnant runs from Cunningham Park in Fresh Meadows, where two original bridges still stand, east to Alley Pond Park at Winchester Boulevard in Queens Village. Though in need of milling and a renovation, the roadway attracts walkers, bicycle riders, and history buffs. Cars, the original inspiration for VMP, are no longer allowed. 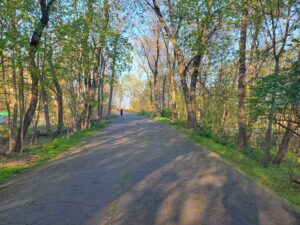