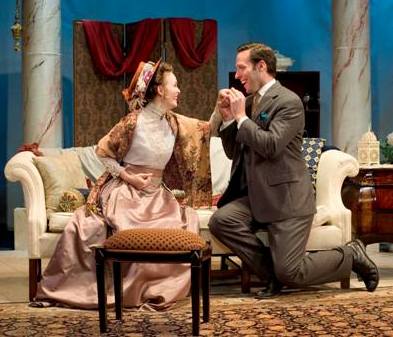 Beware the Ides of March, but enjoy the virtual plays of May. (Those in June, too.)

A local troupe, Titan Theatre Company, is offering a Shakespeare festival right now. Completely online, the program will stream two plays by the Bard of Avon, “A Midsummer Night’s Dream” and “Henry V,” along with “The Important of Being Earnest,” a comedy by Oscar Wilde.

As part of the fun, cast members will participate in live-streamed talkbacks and offer master acting classes. Then, Camp Shakespeare, a tuition-based, week-long camp, will run twice over the summer.

The shows are free, but donations are accepted. The schedule follows.

Written and set in the Victorian Era, “The Importance of Being Earnest” is satire of British high-society that features the quotes “The truth is rarely pure and never simple,” and “No woman should ever be quite accurate about her age. It looks so calculating.”

“A Midsummer Night’s Dream” makes a tossed salad from mistaken identity, young love in the woods, and royal fairies before ending in a triple wedding. First published in 1600, the five-act comedy begins with the news that the Duke of Athens will marry the Amazon Queen. Then, a few more characters forge some romantic messes involving plain old love, unrequited love, misplaced love, family love, and a love potion.

Probably finished in 1599, “Henry V” follows an English king in five acts. In the beginning, the royal mulls the idea of invading France. The plot leads to the Battle of Agincourt in 1415, when British troops defeated a numerically superior French army.

When there’s no COVID pandemic, Titan stages plays at Queens Theatre as an artist-in-residence. Titan Artistic Director Lenny Banovez offered the following thoughts about going online. “This isn’t the way we want things to be. This may not be ‘theatre’ per se. However, we must move forward. We must adapt. We must keep creating high quality content even with the limitations we have. Titan Shakespeare Festival may live online now, but it is indeed laying the groundwork for a fabulous extension of all that Titan Theatre Company has been able to do over the last decade plus.”