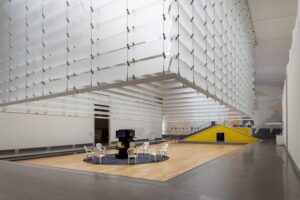 It’s all about the hybrids.

Queens Museum is going to host Katrina Reid: Sub(Urban) Archives for a small live crowd while also streaming the performance piece to the internet world on Nov. 21 at 3 pm.

Continuing with the hybrid theme, the show is billed as “a journey of movement and sound that invites the audience to consider the interplay between memory and migration” and it will take place amid a sculpture which is currently on long-term display at the Flushing Meadows Corona Park museum.

Katrina Reid is a New York City-based dancer and performing artist who favors improvisation within physical landscapes. She has presented around the United States, including at Maspeth’s Knockdown Center and the BMCC Tribeca Performing Arts Center.

She’ll do Sub(Urban) Archives on and around Heather Hart’s Oracle of the Twelve Tenses, a sculpture that’s on display as part of After the Plaster Foundation, or, Where can we live? Up until Jan. 17, 2021, the exhibit features 12 artists (individuals and groups) who were asked to contemplate who has access to home, property, and Planet Earth under capitalism. The responses vary with artists interpreting everything from the resilience of long-time residents to the energy of recent immigrants.

Hart’s piece features the top slice of a mobile home (above). Mostly roof with a little white-framed window and yellow shingle wall, it might have room for a mattress, but not much else. It’s more a cage on wheels than a living space. 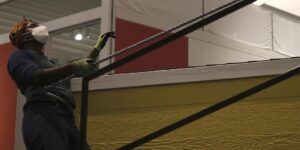