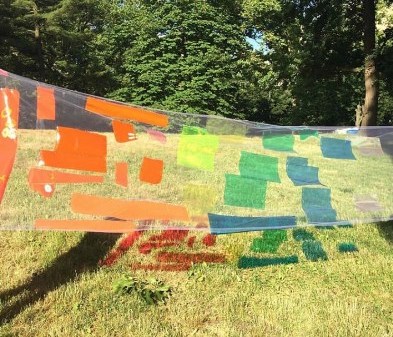 Queens Botanical Garden is back, and the art is blossoming.

The nonprofit AnkhLave Arts Alliance has arranged site-specific installations throughout the Flushing oasis as part of its ongoing effort to promote female contemporary artists of color.

The exhibitioners – called “2020 AnkhLave Garden Fellows” – consist of five immigrants and one first-generation American. Here’s some information on this second annual show, which is on view through Sept. 8.

Asano Agarie Gomez’s “Rosie” across from the Annual Garden.

Gomez, who was born in Japan, favors large, mixed-media sculpture paintings with drawing, fabric, painting, pigment, and sewing. True to its name, “Rosie” is a rose garden that’s full of artificial materials in bright colors that investigates the concept of “otherness” and underscores the differences and commonalities between nature and human creativity.

André, who hails from a Lebanese family in Brazil, is inspired by the transcendence of stained glass and the versatility of assemblage in outdoor art. Her QBG pieces allow incidental sunlight to project differing shadows on the ground. The patches of color intensify and fade as per the sun’s intensity. Visitors can jump into the colored light and transform themselves (or their images).

Bravo-Barbee, a native of Argentina, works at the intersection of photography and sculpture. Her QBG installation centers on a large cyanotype paper flower surrounded by smaller cyanotype ferns and tags honoring femicide victims.

Shigo, who is Japanese, creates abstract installations, murals, and paintings. Her piece, which is inspired by a Japanese Dry Garden, includes sculptural rocks made of abstract paintings on Mylar with a large painting along a skylight railing that forms a backdrop for the regular plantings on the Green Roof.

Though born in Virginia, Sloan Stoddard draws heavily on her El Salvadoran heritage in her writing, visual art, film, and theater. Made mostly from recycled and salvaged materials, her expo celebrates storytelling and the place of rabbits in folk traditions, while also paying homage to QBG’s landfill-related environmental efforts.

Brazil-born Vilas Boas is an anthropologist at heart, so her work is aimed at creating portraits of interesting humans. Her QBG piece honors a Brazilian politician and human rights activist who was murdered on March 14, 2018. (Her killers were never arrested.)

The AnkhLave project is funded by the Queens Council on the Arts with support from the NYC Department of Cultural Affairs in partnership with the City Council. 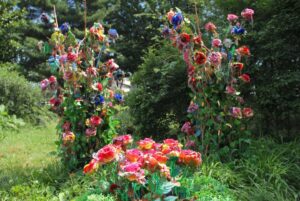