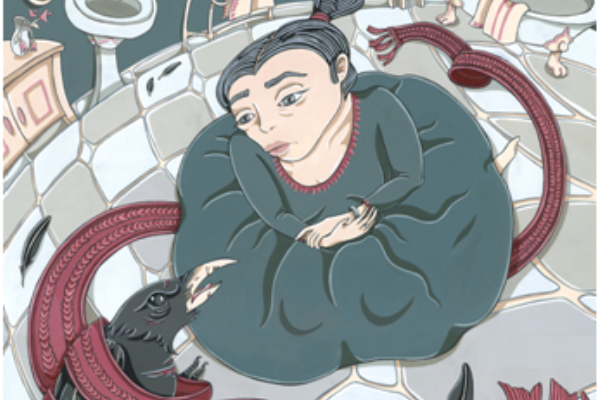 Birds and other animals appear in the works as fantastical creatures acting as spectators and guides in a peculiar world where reality is upturned.

Learn more during an opening reception on Friday, Dec. 17, from 6 pm to 9 pm at Flushing Town Hall, which is located at 137-35 Northern Blvd. The artists will discuss their works starting at 7 pm. A sneak preview follows. 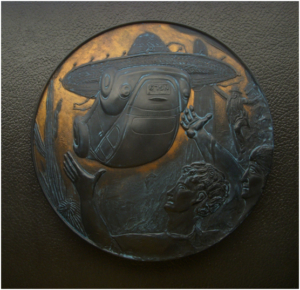 Di Metriou drew inspiration from Mexican author Carlos Castaneda’s novel “Genaro’s Hat” when creating the above bronze relief. It reflects on Castaneda’s decade-long relationship with shamanism and its traditions in a world of energy and magic. 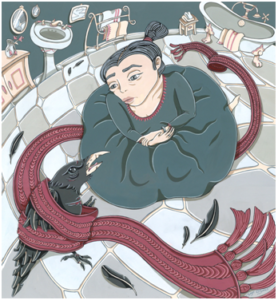 Cotignola looked at various sources, particularly “The Unbearable Lightness of Being” by Milan Kundera, before producing “The Vigil,” which is above. The painting portrays humankind’s peculiar connection to animals, the crossover between our interior lives, and the dichotomies between natural and man-made environments. 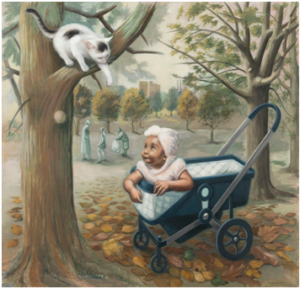 Zambon’s “My Encounter with Momoi” originates from fragments of childhood memories, especially situations that were impossible to understand at the time. 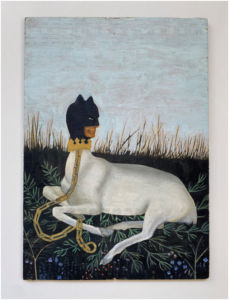 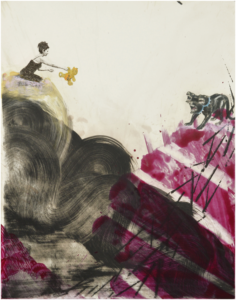 Mack-Valencia’s “Cerberus Needs Love Too” combines acrylic with inks and photo transfer. The photography references reality and memory, while the painting depicts an intuitive response to the images. The characters and elements reflect the real world presented in random and surprising ways. 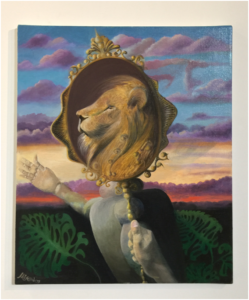 In Strömberg’s “The Great Orator,” the viewer is looking at a mirror with golden ornaments. The lion’s reflection is symbolic of the inner beast that the orator brings to life with his words. 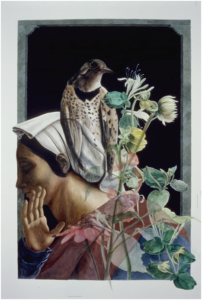 Martin’s “Lazarus” contains the figure of the woman (Martha, a disciple of Jesus) from an early 16th century Sebastiano Del Piombo painting, “The Raising of Lazarus.” In this one, a watchful bird has become Lazarus as he rises into the surroundings of the coming spring. 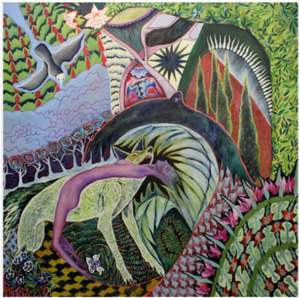 Mehle’s “Back in Baby’s Arms” borrows its title from a Patsy Cline song. The painting features a limp female figure in the grip of a wolf-like dog that’s biting at her neck. Both are embraced by the wings of a dark blue bird and engulfed in a swirling patchwork of nature suggesting an experience of peaceful acceptance of euphoric pleasure inherent in relationships.