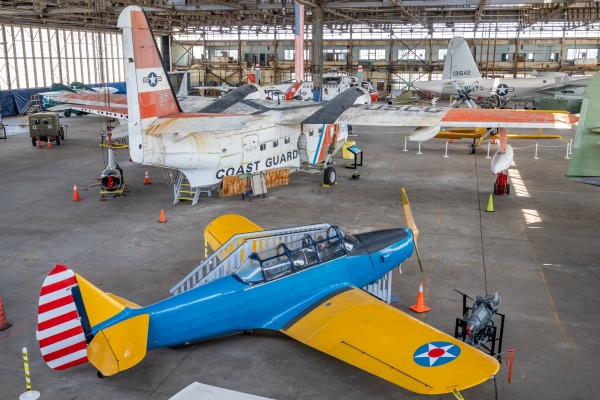 Put your feet up and explore an abandoned airport. Then make a splash in a gigantic body of water and roam the flapper-filled streets.

The Municipal Art Society, which has been promoting NYC’s art and architecture since 1893, is about to offer three virtual tours of Queens — and Queens-ish — sites. (All cost $25 and all start at 11 am.)

First up is a cyber-trek through Floyd Bennett Field with experienced guide Lloyd Trufelman on Sunday, Feb. 28.

Technically in Brooklyn but on Jamaica Bay, Bennett Field was NYC’s first airport when it opened in 1931. The venue hosted many of the first transatlantic flights, including trips by Amelia Earhart and Howard Hughes. The United States Navy took over in 1941 and used the site to support military action during World War II before converting it into a Naval Reserve Training Station in 1946.

Since 1971, Bennett Field has been part of the Gateway National Recreation Area, and most of its structures are empty. However, many are on the National Register of Historic Places because they represent Art Deco commercial aviation architecture. Plus, the former main passenger terminal displays paintings and panels from 1939 that depict modes of transportation, from steam engines to dirigibles.

Although created to supply fresh water to Brooklyn in the 1850s, most of the reservoir is in Queens. At its peak, it held more than 300 million gallons of water, but it became obsolete after upstate reserves started operating in the 1950s. It was then a backup before ceasing operations in 1990. Today, it’s a 50-acre park for recreation that also absorbs storm water, mitigates sewage overflows, and cools the area during the summer.

Last but not least, Greater Astoria Historical Society President Bob Singleton presents A Queens Walking Tour on Friday, March 12. Singleton will use photos and materials from his agency’s archives to show what the borough looked like when it transitioned from farmland to paved urban center with tract housing, planned communities, and highways.

Editor’s note: It’s not really a tour, but it is historic. The ecology nonprofit NYC H2O and Queens Museum will present A Tale of Two Waterworks on Tuesday, March 2, at 6 pm. Sunnyside resident Jeffrey Kroessler, the Interim Chief Librarian at John Jay College of Criminal Justice’s Lloyd Sealy Library, will discuss the history of NYC’s water systems with an emphasis on how and why they were built, followed by a Q&A.