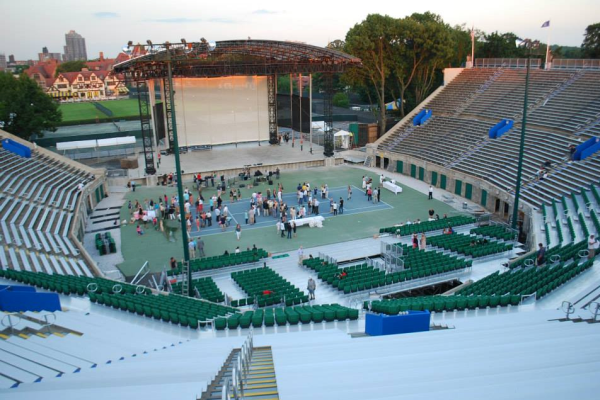 The U.S. Open was absolutely awesome. So why not continue with great tennis in Queens?

For the first time since 1959, the West Side Tennis Club will host Davis Cup Tennis in Forest Hills Stadium on Saturday, Sept. 18, and Sunday, Sept. 19.

The South African team plays its Venezuela counterpart in a best-of-five match series. Kevin Anderson, a former U.S. Open and Wimbledon finalist, is expected to play for South Africa. Other members of the squad might include top 100 singles player Lloyd Harris and former Australian Open and Wimbledon doubles finalist Raven Klaassen.

Venezuela is led by Ricardo Rodriguez, the most successful singles player in his South American country’s Davis Cup history.

The matches are set for a hard court in the famous, 13,000-seat horseshoe-shaped stadium where concerts also take place. It’s the same spot that hosted the U.S. Open from 1923 to 1977.

Order tickets via an email to Randy Walker at RWalker@NewChapterMedia.com.

What is technically known as the “Davis Cup by Rakuten World Group II” is the largest and most prestigious international men’s team tennis tournament. It began as a challenge match between the United States and the British Isles at Boston’s Longwood Cricket Club in 1900.

In 2021, the annual competition features the planet’s top 18 national teams, including Australia, Colombia, Italy, and Spain, the defending champion. Due to Covid, the 2020 Davis Cup was postponed.

Located at One Tennis Place, Forest Hills Stadium was built to host the U.S. Open’s center court matches in conjunction with the adjacent West Side Tennis Club in 1923. The venue’s heyday was in the 1960s and 1970s, when it hosted tennis and live music. The Beatles played two consecutive sold-out shows there in 1964. The Doors and Simon & Garfunkel did a double bill in 1967. Even Frank Sinatra, Barbra Streisand, and Diana Ross performed there before the venue shut down in the mid 1990s due to financial concerns. (The U.S. Open moved to Flushing Meadows Corona Park in 1978.)

In 2013, Forest Hills Stadium underwent a roughly $3 million renovation that included a complete structural overhaul, seat replacement, and the installation of a state-of-the-art stage. The site re-opened in August of that year with a concert by British rock band Mumford & Sons.