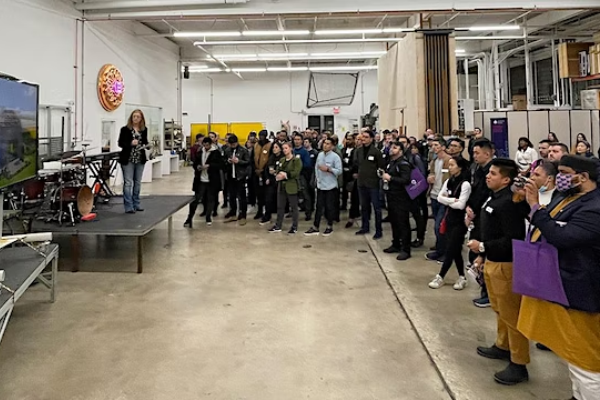 Here’s a chance to network with Tech World leaders and tinkerers and learn new industry trends.

More than 200 creators and innovators are expected to attend this free meetup whose theme is design in, of, and for New York City. Hosted by local marketing guru Ben Guttmann, Kaufman Astoria Studios, Long Island City Partnership, and Plaxall, this periodic event almost always sells out, so register as soon as possible.

Along with the networking, attendees can expect chats from industry leaders and demonstrations by startup entrepreneurs and hackers. The keynote speaker is Pentagram’s Paula Scher, one of the world’s most influential graphic designers. She’s worked with Adobe, Bausch + Lomb, Bloomberg, Coca-Cola, and Microsoft. Not to brag or run up the score, but she’s also worked with the High Line, Jazz at Lincoln Center, the Metropolitan Opera, the Museum of Modern Art, New York City Ballet, the New York Botanical Garden, the New York Philharmonic, Perry Ellis, the Philadelphia Museum of Art, Shake Shack, the Sundance Institute, the United States Holocaust Memorial Museum, and the Walt Disney Company.

Scher’s work has exhibited all over the world (i.e. Museum of Modern Art, the Library of Congress, the Bibliothèque nationale de France), and her award case is bulging with the AIGA Medal, the Chrysler Award for Innovation in Design, and the National Design Award for Communication Design. The Art Directors Club Hall of Fame member also served on the NYC Public Design Commission from 2006 to 2015.

Located at 5-25 46th Ave., Culture Lab LIC is combines an outdoor performance space with an indoor facility with art galleries and a theater where Queens Tech Night will take place. 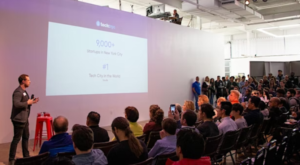