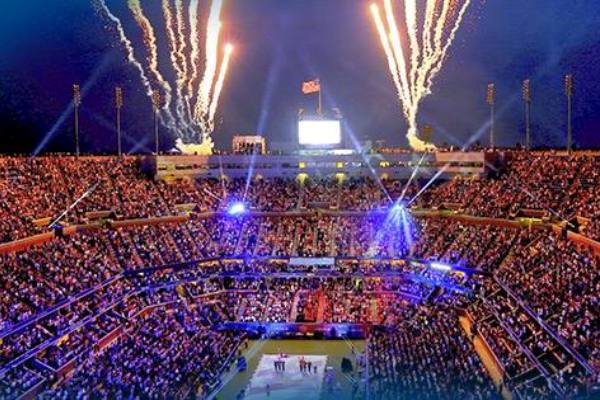 One of the wonderful annual benefits of living in Queens returns after a two-year, Covid-caused hiatus.

All are invited to the hallowed grounds in Flushing Meadows Corona Park for a series of free events, activities, entertainment, and – what else? – tennis.

Attendance is free, but food and merchandise will be for sale. Click here to register for a Fan Week Access Pass which allows holders to even more free events and enters them in a contest to win tickets to the Men’s and Women’s Singles finals.

The U.S. Open Legends Match kicks off the fun on Aug. 23 at 7 pm. Past championship winners Andy Roddick, Kim Clijsters, and Lindsay Davenport will return to the Grandstand court for some exhibition fun, along with other former professionals, such as James Blake. (Players will practice publicly in the 8,000-seat Grandstand throughout the week, too.)

On the same day, the U.S. Open Qualifying Tournament will kick off. Over four days, 128 men and 128 women who aren’t ranked high enough to receive invitations will battle for 16 open spots in each the main draw. (Last year’s women’s single champion, Emma Raducanu, went through the qualifying rounds.)

A brand new event, Flavors of the Open, is set for Aug. 25 at 7 pm. Not free, tickets are required for this night of world-class chefs, tennis luminaries, and samples of the cuisine that will be served during the U.S. Open.

The pop band LANY and soul singer Leon Bridges are confirmed for the Chase Sound Check Concert on Aug. 26 at 8 pm. More will join the lineup soon. Before the concert at 11 am, players will participate in U.S. Open Media Day at Arthur Ashe Stadium. (Fans must register via Fan Pass to attend.)

Then on Aug. 27, Arthur Ashe Kids Day starts at 9:30 am. Powered by Net Generation, this showcase gives fans the chance to enjoy entertainment, star-gawking, and activities. (The schedule will be completed soon.)

“The USTA is incredibly excited to bring back U.S. Open Fan Week this year,” stated USTA CEO and Executive Director Lew Sherr. “We wanted to make sure that Fan Week was free to all attendees, as we want as many people as possible to have the chance to experience our incredible sport. The U.S. Open is a part of the fabric of New York, and opening our doors is one of our ways of saying thank you to the amazing people of the Tri-State area.”

Editor’s note: On Aug. 18, the USTA announced that the center will host Tennis Plays for Peace on Wednesday, August 24, at 7 pm. This is a one-of-a-kind exhibition match benefiting the Global Giving Ukraine Crisis Relief Fund featuring Rafael Nadal, Coco Gauff, Taylor Fritz, and others. 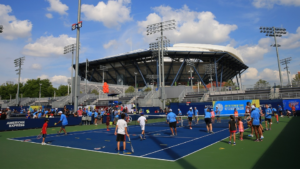