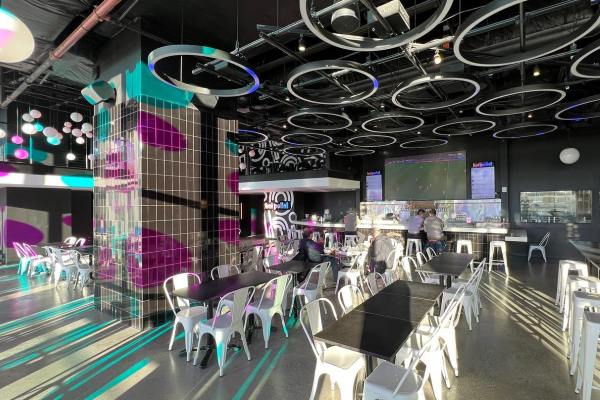 Great things are brewing at Tangram, a multi-purpose mega-development in Flushing.

Hoi Polloi, the area’s first beer garden, opened in the back of the food court on Dec. 1.

Nineteen of the 24 taps are for international and local beers such as MC2 from Equilibrium Brewery, Ball Lightning Pilsner from Catskill Brewery, and award-winning Grimm Artisanal Ales. The other taps are for sparkling cocktails.

For those in the mood for something else, house mixologist Tong Chen specializes in the Polloi Chelada, which includes chili garlic sauce, Maggi seasoning, and a Sixpoint pilsner. He makes other cocktails with Sichuan peppercorn oil and yuzu. 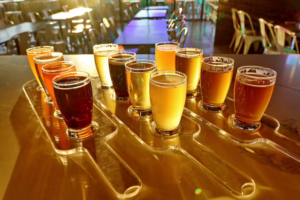 The ambiance is futuristic with a large lava lamp likeness, neon LED lights, colorful graphics, 20-ft LED screens, and a gaming alcove. Three separate spaces can host private events, and the terrace can fit about 40 party people. (In total, Hoi Polloi spreads out over about 5,000 square feet.)

The dance floor glows with balls of light on Fridays and Saturdays with a spinning DJ from the second-floor booth.

“I saw the need for a place … where all the different people of New York can come together to mix on the weekends and to celebrate life’s events,” Tangram rep Todd Leong stated. “We will have Asian kids – 21 and over only please – grooving to Bad Bunny songs they don’t understand next to LatinX kids moving their hips to the sounds of BLKPNK next to African American and white kids engaged in debate about which New York craft beer is the best.” 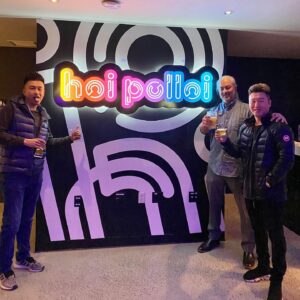