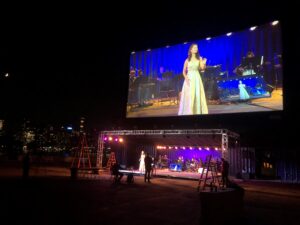 The best Broadway shows are in Astoria these days.

Radial Park is currently hosting an interactive drive-in movie experience with live performances at an open-air venue spread out over about 50,000 square feet. (Address: 27-50 1st St.)

The center of the fun is a version of Andrew Lloyd Webber’s “The Phantom of the Opera” that was filmed at London’s Royal Albert Hall in 2004. It shows on a large, raised screen while two long-time Broadway stars with plenty of Phantom experience – Derrick Davis and Ali Ewoldt – do numbers from the screenplay, dance, and generally entertain with support from a live, 11-piece orchestra.

Patrons watch the roughly two-and-a-half-hour hybrid in their vehicles or via reserved, four-people picnic tables which come with retro boomboxes for audio.

Davis played The Phantom in the 25th Anniversary North American Tour of “The Phantom of the Opera.” The smoky tenor’s Broadway credits include covering Scar and Mufasa in “The Lion King” and giving life to Billy Bigelow in “Carousel.” On television, he was Derek in ABC’s “Dangerous Liaisons.”

Ewoldt was Christine Daaé in “The Phantom of the Opera” on Broadway (30th Anniversary Cast). The multi-range vocalist also played Cosette in “Les Miserables” (Broadway, National Tour) and Maria in “West Side Story” (National Tour). Her television credits include “The Michael J. Fox Show” and “Yield.”

Not into the entertainment? Enjoy the sights and cuisine. Concession stands and food trucks are at the venue, which lies on the Astoria waterfront with direct views of the East River and Manhattan skyline. It’s also steps away from a Citi Bike outlet and an NYC Ferry station. 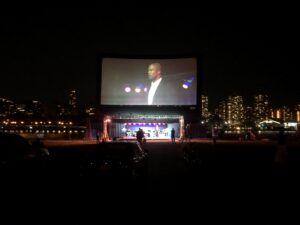