Go Deep, Sack the Quarterback, and Unstuff Thanksgiving Dinner at the Turkey Bowl on Friday

Combine fitness, football, and fun at the Turkey Bowl in Flushing Meadows Corona Park on Friday, Nov. 23, from 10 am to 3 pm.

To take place on the Al Oerter Recreation Center Field, this second annual touch football competition is open to already formed teams and unattached individuals who can join a squad on game day.

It’ll be a relaxed environment, and many rules will be established right before the kick off. Teams will probably consist of six people, but that depends on attendance. There are no uniforms, although players are encouraged to bring jackets and sweatshirts as the entire event is outdoors. The NYC Parks Department will provide footballs, of course, but people can certainly bring their own.

Here is the anticipated game schedule by age group:

Registration is free and open to all. Teams should be on the field at least 15 minutes before the start of their age group’s time slot.

The Al Oerter Recreation Center is located at 131-40 Fowler Ave., about a half block west of College Point Boulevard and one block south of the Flushing Home Depot. It’s named after an Astoria native who won gold medals in the discus throw in four consecutive Summer Olympics between 1954 and 1968. 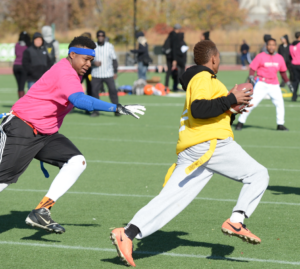 Written by QEDC It's In Queens