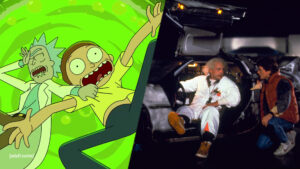 The Queens Drive-In, a partnership between Museum of the Moving Image, the New York Hall of Science and Rooftop Films presents a double feature of Back to the Future and Rick and Morty. A portion of each ticket sale will be donated to Elmcor, a local nonprofit organization that provides support for the communities in Queens hardest hit by the pandemic.
Back to the Future – Directed by Robert Zemeckis. In this rollicking comic adventure, 1980s slacker teen Marty goes back to the 1950s in a time-traveling DeLorean and must arrange his own parents’ meeting, while at the same time try to save the life of his friend, eccentric scientist Doc Brown. With this multilayered, quick-witted blockbuster, Robert Zemeckis perfectly balances science fiction, spectacle, comedy, action and emotional depth. Presented as part of the MoMI and Sloan Science & Film series Science on Screen. Rated PG.
Rick and Morty – Directed by Dan Harmon & Justin Roiland. This beloved, Emmy Award-winning animated series follows genius scientist and misanthropic, self-centered Rick and his nervous teenage grandson Morty as they dimension-hop to universes where snakes rule, cars sneeze, daylight savings time doesn’t exist, and pizzas eat people. In this rare theatrical screening, we present a pair of episodes from the second and fourth seasons. Presented as part of the MoMI and Sloan Science & Film series Science on Screen.
7:30 pm doors open & preshow; 8:30 pm films begin