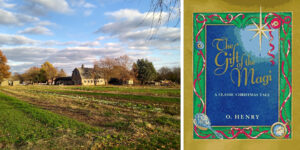 Grab your fleece, hats, gloves, coats, and woolies, and throw on your winter boots! Queens County Farm Museum will host a special outdoor holiday reading of O. Henry’s The Gift of the Magi. This special admission program is designed to enrich the holiday season with social distancing built-in. Renowned actor and raconteur, Queens native Kevin R. Free will lead storytime in the farm’s 3-acre pasture.

– This event is FREE, but advance online registration is required at https://bit.ly/36v6qAE to manage capacity. No door tickets will be available.
– Visitors welcome to bring lawn chairs to enjoy the reading. 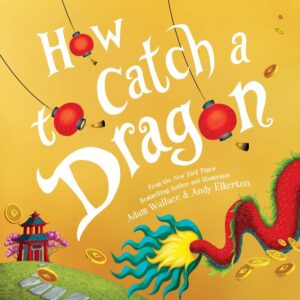 Young readers will gather in a relaxed atmosphere to take turns reading a “book of the month” together. A copy of the book will be given to each child and an APEC educator will engage and encourage the children as they read. The program includes a related activity and animal meet and greet. Your child will leave with a brand-new book each month, to enhance their at home library. Children must wear a mask for the entire program. A certificate of completion will be issued at the end of the series. Limited to 6 participants.
A portion of the funds raised for this series will go towards the care of our animal ambassadors thanks to the generosity of local friends of APEC.
Ages: Grades 1st-3rd (drop-off) | $60* per child 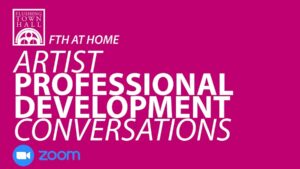 Join FTH Deputy Director Sami Abu Shumays as he talks about what makes a compelling grant application. Whether applying for an artist grant, residency, or other opportunities, there are common questions funders ask for in their applications. During this workshop, we will go over some of those commonly asked questions to help you write a better arts application and gain more support for your art practice.
The conversation will be followed by a Q&A.

The session is free but RSVP is required. Registered participants will receive a Zoom link prior to the event date.

More about these programs: www.flushingtownhall.org/professional-development 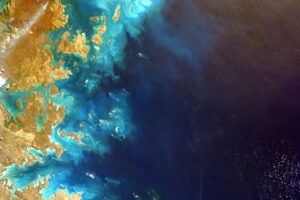 Join Susan Golden, retired high school teacher and officer on the Board of Trustees of the Hackensack Riverkeeper. Susan speaks regularly about a variety of environmental issues and leads engaging, interactive discussions that encourage insightful questions from her audience. Can 21st Century humans live in harmony with the natural world around them? This presentation explores modern society’s relationship with the natural world and our impact on the planet. Issues including water pollution and invasive species, as well as biodiversity and habitat loss, will be discussed. Climate change and sustainable practices on an individual, community, and global level will also be addressed. Think Global, Act Local! There will be Q & A to follow. Zoom link will be emailed upon registration.
​Adults | $10 per household 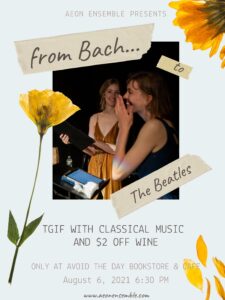 Take your date to an evening of choral music at Rockaway’s only independent bookstore!
We’ve gathered NYC’s finest singers to present a program spanning four centuries. Expect to time travel from Bach’s time to The Beatles’.

What’s better than snuggling up by a bookcase, wine in hand, listening to classical music!?

Admission is free and donations are highly encouraged. $2 off wine only during the performance, so — don’t miss out!

Time: 6:30 PM
Location: 99-4 A Rockaway Beach Blvd, Queens, NY 11694
—————————
About the performers:
ÆON Ensemble is an NYC-based collective specializing in contemporary concert music and synaesthetic collaborations. In fluctuating configurations, ÆON has premiered over 35 new works at venues as a black-tie as Carnegie Hall, Symphony Space, the DiMenna Center, and Princeton University, and DIY as The Baumann, The Cell, The City Reliquary, and even the beach. The goal of these concerts is to provide a world-class immersive musical experience at an array of accessible venues at a price that makes attendance possible for everyone.

About the location:
Avoid the Day Bookstore & Cafe is Rockaway’s only independent bookstore. Owned and run by locals Jianna and Jason Heuer, you can sip on wine, cold brew coffee, or tea while browsing the bookstore’s curated selection of used and new books – including its very own “Beach Reads” section and an ever-growing “Local Authors” section. There is also a selection of local bites, art, gifts, and other merchandise to peruse – rain or shine 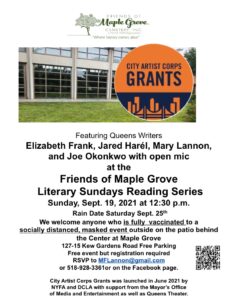 Friends of Maple Grove is excited to announce our first in person Literary Sunday which will be held outdoors on Sunday, Sept. 19, 2021 at 12:30 PM at the Center at Maple Grove. Pre-registration is required for this free event and it is open to fully vaccinated individuals only. Masks will be worn to protect everyone’s health and safety. We look forward to hearing Queens writers read from their latest work. See flyer for details
The event is free, however, pre-registration is required to anticipate seating requirements: RSVP to MFLannon@gmail.com or 518-928-3361
Free parking is available on cemetery grounds. Enter the gate at 129th St. & Kew Gardens Road. If the small lot is full, turn right at the
end and park on the right side of the cemetery road. 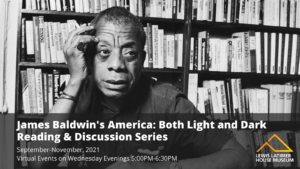 About this event
Participants are welcome to join any number of the five virtual sessions. This series takes place biweekly on Wednesday evenings in September – November 2021.

What does it mean to be American? Reading excerpts from essays “Everybody’s Protest Novel,” “Many Thousand Gone,” “Carmen Jones” and “The Harlem Ghetto,” we will discuss Baldwin’s speaking truth to the power of America’s myths, stories and media, which often obscures and warps the realities of the daily lives of Americans, especially Black Americans.

What does it mean to be American? Continuing Baldwin’s exploration of the constructions and delusions within American mythos, and the contradictions and complexities of American identity, we will read excerpts from essays like “The Discovery of What It Means to Be American,” and “In Search of a Majority.”

Reading the two letters in Fire Next Time, we will discuss how Baldwin’s letter-writing is a variation on the theme of the “voice in the wilderness,” and a continuation of the Black prophetic tradition.

Nov 17 – Baldwin’s Fire Baptized Truth: To Be Pentecostal Preacher and A Questioning Artist

Despite not having as much of a focus in many studies about Baldwin, his religious, specifically Pentecostal, background influenced and shaped much of his writing. We will look at previous works and excerpts from Go Tell It On the Mountain to discuss how the tensions between religion and art shaped much of Baldwin’s views on truth and love, and how the two shape our current cultural politics. 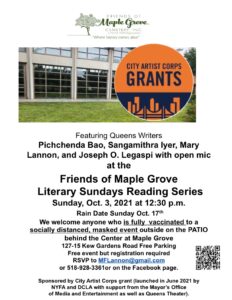 Friends of Maple Grove presents: Literary Sunday on October 3, 2021 at 12:30 PM outdoors at the Center at Maple Grove 127-15 Kew Gardens Rd. Kew Gardens. Pre-registration is required for this free event and it is open to fully vaccinated individuals only. Masks will be worn to protect everyone’s health and safety. We look forward to hearing Queens writers read from their latest work.

RSVP to MFLannon@gmail.com or on the Literary Sunday Facebook Page. See flyer for details 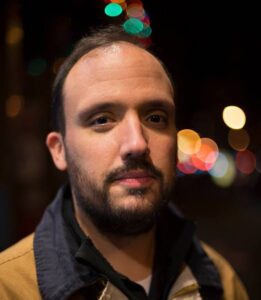 PLEASE NOTE: YOU WILL NOT BE ALLOWED INTO ESPRESSO 77 WITHOUT PROOF OF VACCINATION. (YOU WILL ALSO NEED TO PRESENT A VALID PHOTO ID.) MASKS WILL BE REQUIRED INSIDE THE CAFE.

Alex Segura is an acclaimed, award-winning writer of novels, comic books, short stories, and podcasts. He is the author of Star Wars Poe Dameron: Free Fall, the Pete Fernandez Mystery series (including the Anthony Award-nominated crime novels Dangerous Ends, Blackout. and Miami Midnight), and the upcoming Secret Identity (Flatiron Books). His short story “Red Zone” won the 2020 Anthony Award for Best Short Story, and his border noir short story, “90 Miles” will be included in THE BEST AMERICAN MYSTERY AND SUSPENSE STORIES of 2020. He has also written a number of comic books, most notably the superhero noir The Black Ghost, the YA music series The Archies, and the “Archie Meets” collection of crossovers, featuring real-life cameos from the Ramones, B-52s, and more. He is also the co-creator/co-writer of the Lethal Lit crime/YA podcast from iHeart Radio, which was named one of the best podcasts of 2018 by The New York Times. By day he is the Senior Vice President of Sales and Marketing at Oni Press, with previous stints at Archie Comics and DC Comics. A Miami native, he lives in New York with his wife and children. 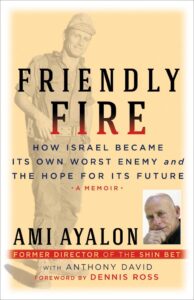 Retired Admiral Ami Ayalon, a former director of Israel’s Shin Bet security agency, shares his own thoughts and philosophy about what Israel needs to do to achieve relative peace and security and to sustain itself as a Jewish homeland and a liberal democracy. In Friendly Fire, Ayalon shares his deeply personal journey of discovery, seeking input and perspective from both Palestinians and Israelis whose experiences differ from his own and from each other.

Join Commonpoint Queens, along with Prof. Mark Rosenblum who will moderate the discussion, to hear how Ayalon has come to realize that the sustainable and democratic Jewish homeland for which he repeatedly risked his life can only be realized side-by-side with a Palestinian state whose citizens have genuine hope for their own bright future.

A former Flotilla 13 (Israel’s navy SEALS) commando, a commander of the navy, cabinet minister, Knesset member, Ami Ayalon was the recipient of the Medal of Valor, Israel’s highest military decoration.

An expert on the Middle East, Prof. Mark Rosenblum is Director of the Ibrahim Student Leadership and Dialogue Middle East Program with Queens College, and Director Emeritus of the Center for Jewish Studies and the Center for Ethnic, Racial, and Religious Understanding.