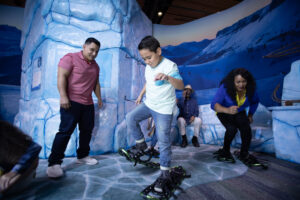 Museum visitors can experience the thrill of adventure, gain an appreciation for the wonders of nature, and prepare for the unexpected in Survival: The Exhibition, an exciting temporary exhibition that challenges visitors to become the ultimate survival expert. Survival: The Exhibition features a zipline, ropes course and museum displays that simulate extreme scenarios in an interactive and safe place for visitors of all ages to learn and test essential survival skills. Topics explored include first aid, water safety, navigation, fire and preparedness. $7 per person, plus NYSCI admission. (Members: free) 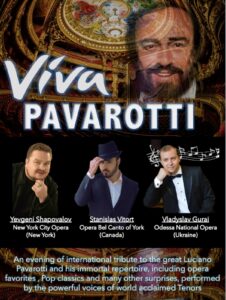 Luciano Pavarotti extended his presence far beyond the limits of Italian opera. Quickly establishing his trademark rich sound as the great male operatic voice of the 20th century, he expanded his reach to stadium concerts and pop collaborations which brought him fame beyond measure. While magic was created when Pavarotti, Domingo and Carreras met onstage and became the Three Tenors, Pavarotti’s fame hit new heights with his annual Pavarotti and Friends concerts, joining with prominent pop stars such as Liza Minnelli, Stevie Wonder, Bono, and others, to raise the profile of classical music. At this special concert, our tenors sing Nessun Dorma, O Sole Mio, Mamma, as well as popular American standards. Join us in celebrating the superstar tenor and his influence on the music world. $48, $42
Presented at St. John’s University, Marillac Hall, 8000 Utopia Parkway, Jamaica, NY 11439
For Tickets and Info: www.visitqpac.org or call 718-631-6311. 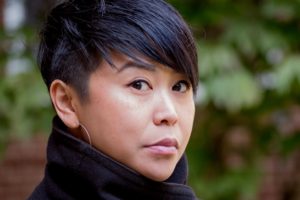 Sokunthary Svay is a Khmer writer from the Bronx. She is poetry editor for Newtown Literary, the only literary journal for the borough of Queens, and a founding member of the Cambodian American Literary Arts Association (CALAA). She has received fellowships from American Opera Projects, Poets House, Willow Books, and CUNY. Her first collection of poetry, Apsara in New York, is available from Willow Books. She is a doctoral student in English at The Graduate Center, CUNY. Her first opera, in collaboration with composer Liliya Ugay, will premiere in January 2020 at the Kennedy Center Terrace Theater.

An open mic will precede the featured reader. Any genre, three minute limit. Signup starts at 6:30. The venue asks for a $5 counter purchase. 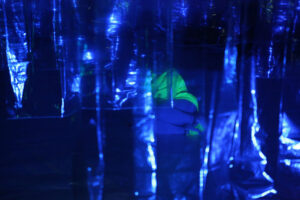 “dream[e]scapes is my first look inside building a world that is particularly made for me and bodies that look like mine. it is a practice in duration and reimagining the gaze we place on ourselves and those around us. i come to think of it as a 24/7 event that is always happening in spaces that we claim to reside in….spaces we think we already know. what is it like to step into a pool and realize it is an ocean?”

dream[e]scapes began its development as part of a Creative Residency at The Chocolate Factory Theater in September 2018, curated by Blaze Ferrer. 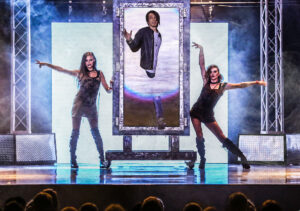 Friday, April 17, 2020, 8pm
REZA: Edge of Illusion
Reza is recognized as one of today’s most highly sought-after entertainers in the touring illusion industry, delivering innovative, engaging and spectacular performances worldwide. Reza’s recent tour and television appearances have astounded over 30 million viewers from across the World. Reza’s unique brand of entertainment has landed him on popular reality shows across 31 countries, including recent US TV appearances on A&E’s Duck Dynasty and The CW’s Penn & Teller: Fool Us. More than a magic show, Reza infuses state of the art production elements, masterful comedic timing, and numerous interactive moments, allowing the audience to experience the magic first hand. Reza’s new show Edge of Illusion, is a ground-breaking grand scale production in which he connects with the audience on a very personal level. Over the last decade, Reza has garnered a world-wide buzz and loyal fan base with his passion for creating signature grand-scale illusions. Reza is intriguing, engaging, and captivating. He isn’t just a magician. He is an entertainer.
$48, $42
Presented at The Lexington Center, 25-26 75th Street, East Elmhurst, NY 11370
For Tickets and Info: www.visitqpac.org or call 718-631-6311. 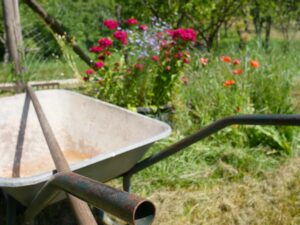 Bayside Historical Society welcomes volunteers to help beautify our garden! We’ll be clearing out last year’s weeds and old plants and prepping the beds for new flowers and plants. Check out the emerging daffodils from last year’s planting event! The cost is free; gardening supplies will be provided. RSVP on the BHS Website.

(The Mets are playing at home so the #7 is not affected for the weekend!)

Since 1999, when the Metrocard matured, I have led a tour called The World of the Number 7 Train. This series of six walks and connecting rides along North Queens transportation corridor became my signature tour, focusing on what the #7 train did to and for adjacent neighborhoods since it began service in 1914. So much has changed since the tour began. In the NEW World of the Number 7 Train, walks take place in the Hudson Yards, the Long Island City shoreline, Flushing West, the Iron Triangle, North Corona, and Woodside-Jackson Heights. The routes are all different from the original tour. SO COME AGAIN! Lunch is still in Flushing’s Asian food mecca. Tour fee is $49 and you need to register by check to Jack Eichenbaum, 36-20 Bowne St #6C, Flushing, NY 11354 (Include name(s) and email address(es.) Or pay with PayPal https:geognyc.com/payments/ Queries to jaconet@aol.com 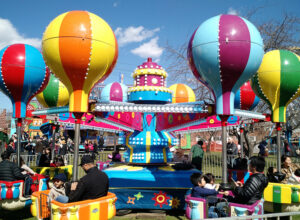 Celebrate spring down on the farm. Tilt-A-Whirl in our orchard and kick off the season with children’s carnival rides, hayrides & midway games. Carnival rides included in admission. Height rules apply at all rides. 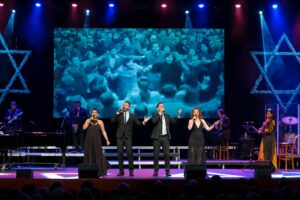 Sunday, April 19, 2020, 3pm
70 Years In The Promised Land
From the Producers of the highly acclaimed operatic-pop crossover vocal group Kol Esperanza, comes 70 Years In The Promised Land, a blockbuster review celebrating Israel’s 70th birthday. Musical Director and Producer Tomer Adaddi and an international cast that includes Revital Zalcman, Lital Gabai Kakon, Omer Shaish and Nir Sheaber, take us on a musical journey comprised of the sights and sounds of Israel! From the eastern shores of the Mediterranean Sea, to the coast of Haifa, from the mountains of Galilee, to the Negev, join us as we celebrate this breathtaking country, rich in religious significance and cultural diversity. $50, $45
Presented at St. John’s University, Marillac Hall, 8000 Utopia Parkway, Jamaica, NY 11439
For Tickets and Info: www.visitqpac.org or call 718-631-6311. 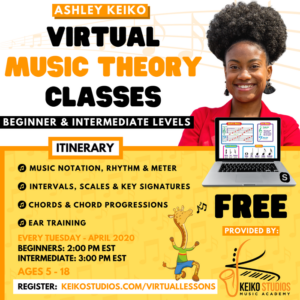 Keiko Studios are happy to announce that EVERY TUESDAY at 2pm & 3pm we will be offering weekly FREE Virtual Music Theory Classes for beginner and intermediate students, taught by Founder and President, Ashley Keiko! (End date TBD).

Virtual Music Theory Classes can be an exciting addition for students who are already taking private or group instrument/vocal lessons to enhance their skill set and increase their rate of progress. For students not currently taking lessons but interested in learning something new; skills learned can later be applied to an instrument, singing, rapping, beat making, and even music production!

Have your children take part in this fun extracurricular activity in their homeschooling schedule! Slots are still available for both beginner and intermediate lessons! Join today! (Adults interested in music theory classes can join the intermediate class.)