TAKE ROOT, now in its 13th season, nurtures dance artists at established stages in their careers, pairing them in a split bill or full evening-length program. This monthly series supports dance makers’ experimentation and growth with support to present their work to the public. Take Root will present 20 aesthetically diverse artists among seven performances from July 2021 – June 2022.

Alison Cook Beatty Dance’s MAHAWAY: SPRING ETERNAL is a two-act ballet that tells the story of a Mother Skunk named Akhushtal, her baby girl Mahaway, and a protective jaguar named Ix Chel. MAHAWAY: SPRING ETERNAL is a commemorative dance & musical celebration of the 100th anniversary of the Paris premiere of Igor Stravinsky’s and Vaslav Nijinsky’s “The Rite of Spring”. Cook-Beatty’s ballet premiered at The Schermerhorn Theater in Brooklyn, NY, on the century anniversary date May 29, 2013, in collaboration with composer Dorian Wallace, the co-artistic director of Tenth Intervention. In this virtual performance, 2019, Tenth Intervention performs live with 25 dancers from Alison Cook Beatty Dance and Infinity Dance Theater, a non-traditional dance company committed to expanding the boundaries of dance by featuring dancers with and without disabilities, under the direction of Artistic Director Kitty Lunn.

Anabella Lenzu’s The night that you stopped acting/ La noche que dejaste de actuar, confronts the absurdity and irony of life, while being an artist and a spectator in today’s world. The work reflects Anabella Lenzu’s experience as a Latina/European artist living in New York and comes from a deep examination of her motivations as a woman, mother, and immigrant. 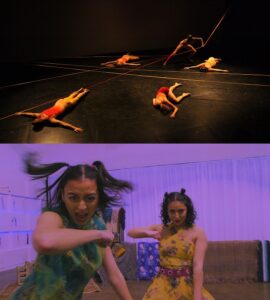 TAKE ROOT, now in its 13th season, nurtures dance artists at established stages in their careers, pairing them in a split bill or full evening-length program. This monthly series supports dance makers’ experimentation and growth with support to present their work to the public. Take Root will present 20 aesthetically diverse artists among seven performances July 2021 – June 2022.

Hee Ra Yoo will present Almost There for Take Root. The Korean phrase “거의 다왔는데” means reaching for something that is just a little too far, but possible to obtain, roughly translated to English as “almost there.” Yoo and Dancers’ new work is about our collective dream to reach our desires in a modern, chaotic world. The dancers represent a crowd becoming a stampede, a warning of one possible outcome of our current path. ‘Almost There’ was developed during Yoo and Dancers’ three-month residency at Dixon Place.

N/N Dance Collaborative presents a selection of dance works crafted in situ, where movement and location are fully integrated. Nancy Brier’s Breezeblocks (2019), Mother Nature (2021) and Now Was Zen (2021) are works that submerge us in otherworldly environments and take us out into raw nature – searching for humanity’s delicate balance between social and environmental, between dysfunction and transformational change. Nicole Speletic’s DNA (2019) and Dis-Ease (2020-21) peer into internal spaces, the ones deep within ourselves and the ones that we intimately inhabit – places which quietly bear witness to the lived moments we nightly withstand or daily pass through. (created in Ljubljana, Slovenia) 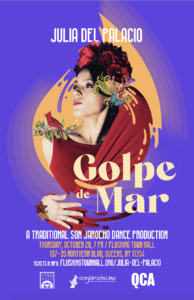 Rooted in zapateado jarocho, the traditional dance from Veracruz, Mexico, Julia del Palacio premieres “Golpe de Mar” (Struck by the Sea). A reflection on son jarocho dancers’ intentional movement, agency, and individual style, “Golpe de Mar” unpacks this 300-year-old style and proposes new ways of approaching it, enhancing the role of the dancer within the musical ensemble and celebrating dancers’ contributions to the preservation and growth of the genre.

This concert is made possible (in part) by the Queens Council on the Arts with public funds from the New York City Department of Cultural Affairs in partnership with the City Council.