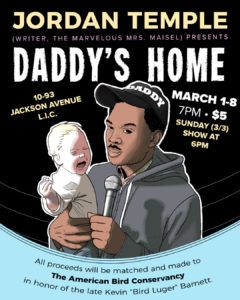 Jordan Temple is a NYC-based, NYC born stand up comedian, playwright and T.V. writer. In 2018, he made his nationally televised stand up debut on “Conan”. In 2017 and 2018 he wrote and acted in a popular parody play ‘Hidden Fences’ as a response to the viral mistake made at the Golden Globes and Academy Awards mixing up ‘Hidden Figures’ and ‘Fences’. Jordan is also the newest writer on the Emmy award-winning Amazon series, ‘The Marvelous Mrs. Maisel’.

He will be working on a long set and will joined on some nights by special guests as well as fellow stand ups and Mrs. Maisel writers Noah Gardenswartz and Alison Leiby. Proceeds go to the American Bird Conservancy in the memory of his late friend and comedian, Kevin Barnett.