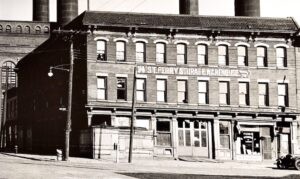 Percy Loomis Sperr, born in 1890, was known as the “Official Photographer for the City of New York.” In the early 1920s, Loomis moved to New York where he resided in Staten Island for the next forty years until his death in 1964. Starting in 1923, Loomis came under contract with the New York Public Library who hired him to photograph the five boroughs of New York City. This was instrumental in chronicling the changing architectural landscape of the city and has become such a great resource for contemporary historians. From the early 1920s until early the 1940s, Sperr’s on the street photography produced more than 40,000 photographs of the five boroughs of New York with the main focus on his home borough Staten Island.

The exhibition displays a group of photographs specifically depicting Queens’ colonial homesteads and Victorian mansions, farm and marsh landscape, and urban settings, many of which sadly do not exist anymore. His work has become a living record of what Queens County looked like before it was transformed into how we know and experience it today. The images are startling and breathtaking. Though there is a documentary perspective and intention, the photographs can also be analyzed through their atmospheric, and expressive qualities as well as their emphasis on pictorial composition and sensitivity towards light and shadow. This will be the first time that they will be presented through an artistic lens with the hope of bringing Sperr into consideration within the field of fine art.

The virtual opening featuring curator Daniela Addamo is coming soon. RSVP through the link below and take the first scope to view the exhibit!