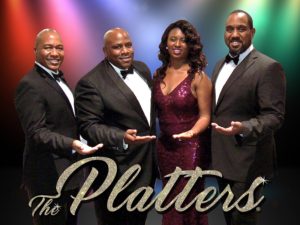 One of the most successful vocal groups of all time, The Platters are as popular today as they were when they first burst onto the world stage 50 years ago. With 40 singles making an appearance on the Billboard Hot 100, they were the most successful vocal group in the world, between 1955 and 1967. At present, their songs continue to be featured in today’s motion picture and television soundtracks: My Prayer in the film The Curious Case of Benjamin Button, Twilight Time on Fox’s The X Files, Smoke Gets In Your Eyes to market Honda’s Odyssey, and, most recently The Great Pretender on Fox’s Emmy Award winning series Empire. Along with these songs, you’ll hear You’ve Got The Magic Touch, Only You, and a myriad of popular songs from both then and now. Special guest Bradd Marquis presents a special tribute performance to the great Sam Cooke. Backed by a live band, Bradd performs a selection of Cooke’s songs including You Send Me, Twistin’ The Night Away, Another Saturday Night, Bring It On Home To Me, Having a Party and others. These artists made great records. That was the secret to their success.