– The Fantasy World Where Gugak Meets Cinema (US Premiere) – 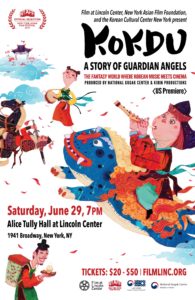 The event features live accompaniment performed by a 20-member ensemble from the National Gugak Center (NGC), the representative headquarters of Korean traditional performing arts, who will be playing the score for the first time in the US.

Melding fantasy and reality, Kokdu weaves between cinematic storytelling and an impressively staged theatrical piece as it explores Korean myths and traditions while dealing deftly with dark themes of death and mourning, with a poignant and ultimately uplifting touch. As a spectacle, not only does Kokdu brim with music and dance, it makes the challenging topic of our mortality accessible to audiences of all ages.

Director Tae-yong Kim of the critically acclaimed Late Autumn (2011), Music Director Jun-Seok Bang of Korean box-office hits such as Along with the Gods (2017, 2018), and the National Gugak Center have joined forces to bridge art forms and build a unique, heartwarming story of loss and redemption, steeped in local Korean folklore but with a universal appeal.

Synopsis :
Both a fairy tale and a phantasmagoria, the film follows two children, Su-min and her younger brother Dong-min, who accidentally fall in the realm of the dead after losing their grandmother’s shoes in a thoughtless, Faustian deal. As the children search the netherworld to retrieve the shoes, they encounter a mischievous band of living kokdu, the wooden figurines that guide the souls of the dead to the afterlife.