Rhizome Voice – A Movement, Not a Moment: The Black Liberation Movement through Time 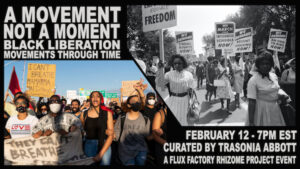 The current uprising has given way to a multitude of new local liberation organizations started by young activists. To those young activists, we pose some questions: How was this mobilization possible in such a short time? How were the current organizers influenced by previous movements?

How does this experience compare to movements of the past – we invite experienced (our elder) activists to join the conversation. What similarities to your own activist beginnings, in spirit and drive and urgency, do you feel from the latest iteration of the movement?

Join us for an honest conversation with organizers Nathylin Flowers Adesegun and Fayola Fai to talk about their experiences, influences, and future goals, bridging the gap between the decades of the Black Liberation Movement within the United States, connecting past movements to the current one with the hopes of rekindling victories and sharing tactics to keep the current movement alive.

Nathylin Flowers Adesegun (@flowers7powers) has been an activist, an artist, and a community leader for her entire life. She started organizing with the Scranton Youth Chapter of the NAACP, marching with Dr. Martin Luther King at Washington DC in 1963. Back then they were fighting for jobs, justice, and housing, and she’s still fighting for jobs justice, and housing. Flowers help organize and run meetings and actions, as well as lobby elected officials at a local, state, and federal level.
⁣
Fayola Fair (she/they) (@fibetryin) is an educator, curator, activist, and organizer from Jamaica, Queens who works to center and uplift Blackness in all iterations. Fayola is an active member of the Queen’s community fridge network, volunteering and organizing with the Jamaica Community Fridge. Fayola is also the creator and curator of the Reading for Black Lives Project and a part of South Queens Women’s March. Fayola hopes to follow in the footsteps of radical Black activists who dared to envision a new world.