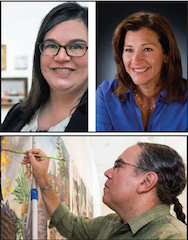 Panelists: Jennifer Kreder, Professor of Law at Solomon P. Chase College of Law, Northern Kentucky University
Jackie Swift (Comanche/Fort Sill Apache), Repatriation Manager, National Museum of the American Indian, Smithsonian Institution
Additional Speaker To Be Announced
This panel addresses the process of repatriation at the National Museum of the American Indian (NMAI) and the repatriation of artwork, which was stolen from Jewish families during the Holocaust-era. Jennifer Kreder will discuss how museums have undermined the mission of the WWII Army Monuments Men (and Women), which entailed the recovery and return of art plundered during the Nazi era whenever and wherever it could be found. Jackie Swift will speak about the process of restoring Native American cultural items and human remains including funerary objects, sacred objects, and objects of cultural patrimony from museum collection to lineal descendants and culturally affiliated tribes, clans, villages, and/or organizations. Conversation will follow regarding the concept of restorative justice within these two cultural contexts.
Part of the Drs. Bebe and Owen Bernstein Lecture Series
Part of the KHC/NEH 2018-19 Colloquium
Survivance on Turtle Island: Engaging with Native American Cultural Survival, Resistance, and Allyship