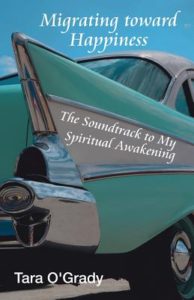 Join Book Culture LIC on Wednesday, August 21st at 6:30pm to celebrate the release of Migrating Toward Happiness: The Soundtrack to My Spiritual Awakening with a musical performance and signing with the author, Tara O’Grady. She and guitarist Vinny Raniolo will perform the songs from the soundtrack of her new memoir.

If you have ever wondered “What is the purpose of my life?” then this book is for you. Want to find out what’s on the other side of the rainbow? Put your red shoes on and join Tara O’Grady and her spirit guides as they escort you on a magical and melodious tour down the Yellow Brick Road. Utterly single, recently laid off, and lamenting a city that is consuming her spirit, this native New Yorker begins to not only notice but understand the road signs that the universe is laying out before her as she awakens to its mysteries. Guided to take a symbolic journey replicating her Irish immigrant grandmother’s 1957 American road trip in a Chevy Bel Air, Tara begins her path to a spiritual awakening, soundtrack included. It is a road trip like no other. Let Tara show you how to reconnect to a life beyond the cubicle and follow your intuition to fulfill your heart’s desire. Prepare to get happy.

Tara O’Grady was an English teacher who became a jazz singer, recording artist and songwriter. She has released five albums of jazz, blues and folk music and performs with her band all over the world. This is her first book. She is the daughter of Irish immigrants and lives in New York City. She has a “thing” for butterflies.