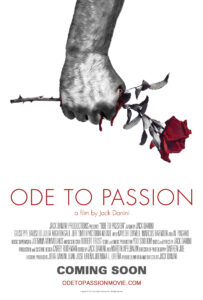 Ode to Passion will be making its World Premiere at the Queens World Film Festival on Saturday, March 21st at 4:45pm.

Director Jack Danini has taken an unimaginable approach to Ode to Passion by creating an indie musical to rival West Side Story. The film’s cast is led by Broadway powerhouses Giuseppe Bausilio (Cats, Hamilton) and Julia Nightingale (The Ferryman). In New York City, a young writer’s resolute belief in true love is put to the test by a beautiful woman and her struggle with addiction. Award-winning cinematographer Darren Joe guides the audience through the grit and glamour of “the city that never sleeps,” while Yoo Soo Kim (former Hemmingbirds front man, To the Lions, Kwaczala) contributed an elegant, original score and the music production for all the songs in the film.

Tickets are required upon arrival, you can snag your ticket by clicking the link