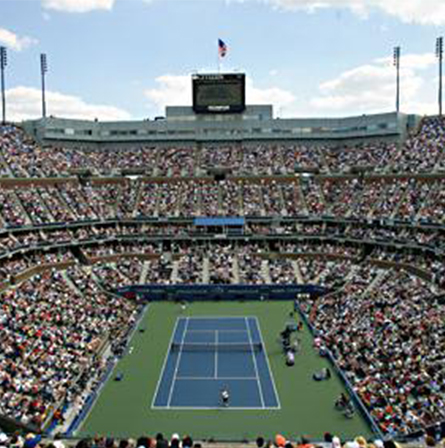 The USTA Billie Jean King National Tennis Center is the largest public tennis facility in the world. It’s also the home of the annual U.S. Open, the biggest of the four Grand Slam professional tennis tournaments. An estimated 46.5 acres, the center has 45 public tennis courts, including indoor ones with clay surfaces. It is open to the public seven days a week and 11 months a year — not during the U.S. Open, of course!

The main attraction is the Arthur Ashe Stadium, the world’s largest outdoor tennis-only venue. Named for one of the sport’s first great African-American stars, this coliseum seats more than 22,000 and boasts 90 luxury suites, restaurants, and a two-level players lounge. Next door is the Louis Armstrong Stadium, which honors the memory of the jazz legend who lived in nearby Corona and performed at the venue when it was called the “Singer Bowl” during the 1964 World’s Fair.

The qualifier rounds to the U.S. Open take place a week before the main event. They are free to the public.

Inside scoop: The grounds are currently undergoing a $550 million renovation which includes construction of three new courts and a redesign to improve foot traffic. Ashe stadium now has a retractable roof and more seating, and Armstrong Stadium is about to undergo improvements. With a 2017 projected completion, the changes will make it possible for an estimated 10,000 more fans to visit per day.