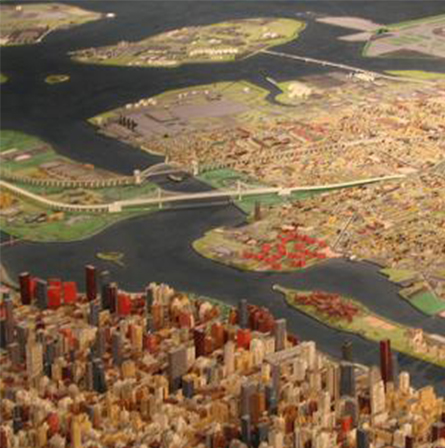 The Queens Museum re-opened in 2013 after a $69 million renovation that created 50,000 more square feet, extra galleries, studios for resident artists, and a new, gorgeous sky-lit atrium.

The museum is most famous for its Panorama of the City of New York, a 9,335-square-foot, 900,000-structure, scaled-down architectural model of all five boroughs. The permanent collection includes a display of Tiffany glass, paintings from Salvador Dali, crime scene photographs from the Daily News archives, and more than 6,000 artifacts from the 1939 and 1964 World’s Fairs.

Multi-culturalism is the focus of most of the museum’s special programming, and exhibitions have included Across the Pacific: Contemporary Korean and Korean American Art; Out of India: Contemporary Art of the South Asian Diaspora; and Modern Odysseys: Greek American Artists of the 20th Century.

Inside scoop: The museum is located in the New York City Building, which was constructed for the 1939 World’s Fair. From 1946 to 1950, the venue hosted the United Nations General Assembly which created the state of Israel in British-occupied Palestine in 1947. While in Queens, the entity also dealt with the Indian Independence Act of 1947, which dissolved the British Indian Empire, and created the Universal Declaration of Human Rights, which decrees that all human beings are born free and equal in dignity and rights.