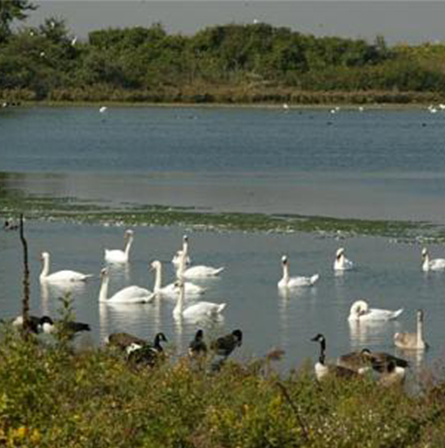 The refuge’s 9,155 acres contain diverse habitats including salt marsh, upland field and woods, several fresh and brackish water ponds and an open expanse of bay available for exploration. At the Visitor Contact Station, a recently built “green” building, rangers can point you in the right direction whether you are interested in bird watching, strolling quiet trails or just experiencing the outdoors. The facility is also home to exhibits which highlight Jamaica Bay’s remarkable plant and animal life, history, and how people continue to shape the nature of the bay. A wide range of ranger and volunteer led programs are offered year-round at the site, and include presentations on seasonal wildlife, sunset tours, family programs and an annual lecture series. Check out what’s happening at Jamaica Bay.

A birder’s paradise, there are more than 330 bird species that have been sighted at the refuge over the last 25 years; that is nearly half the species in the Northeast. It is one of the most significant bird sanctuaries in the Northeastern United States and one of the best places in New York City to observe migrating species. The refuge is also home to an impressive array of native reptiles, amphibians, small mammals, over 60 species of butterflies and one of the largest populations of horseshoe crabs in the northeast.

Originally managed by the New York City Parks Department, Park Commissioner Robert Moses ordered the creation of two large fresh water ponds in Jamaica Bay — East Pond and West Pond — which are still major parts of the landscape today. In 1972, the city transferred ownership of the refuge to the National Park Service and it became part of Gateway National Recreation Area.