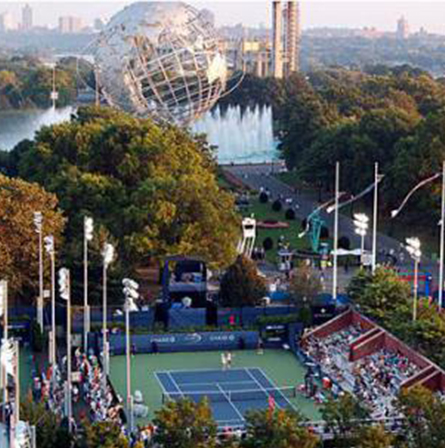 Flushing Meadows Corona Park is the fourth biggest public space in New York City. With 898 acres it is 55 acres larger than Central Park in Manhattan, and it hosts a wonderful mix of flora, fauna, waterways, paths, athletic facilities, statutes and cultural organizations.

Smack dab in the center is the borough’s most recognizable structure: The Unisphere. Erected for the 1964 World’s Fair, this 140-feet-high, 700,000-pound stainless steel globe rises above a multi-spouted wading fountain. In fact, statues are everywhere in this park, which was created from ash heaps (described in F. Scott Fitzgerald’s novel The Great Gatsby) in order to host the 1939 World’s Fair.

Rowboats and paddleboats are available for rent in Meadow Lake, which is the Big Apple’s largest body of fresh water. In the same spot, the American Small Craft Association keeps more than a dozen sloop-rigged sailboats, which are used for teaching and racing. It’s also the site of the annual Hong Kong Dragon Boat Festival, an international event during which more than 150 teams compete in about 80 rowing races over a long weekend in August.

Landlubbers can enjoy the multitude of walking and bicycle paths, some of which connect to the Brooklyn-Queens Greenway. Soccer, volleyball, and cricket games abound in the numerous fields and playgrounds, and the Corona Aquatic Center boasts an Olympic-size indoor pool, an ice rink, and public changing rooms. Plus, Urban Park Rangers offer free nature walks at Willow Lake, and docents offer free World’s Fair History Tours on a first-come, first-served basis.

The following venues have ties to the 1939 and 1964 World’s Fairs. Some are remnants. Some are renovated and relocated exhibits. Some grew up around pavilions. But they all are located near each other in a corridor akin to the Museum Mile in Manhattan.